Report on the Organic Monitoring Program of Baden-Württemberg 2015

In 2015, the following issues were addressed:

Following is a summary of the results from 2015. 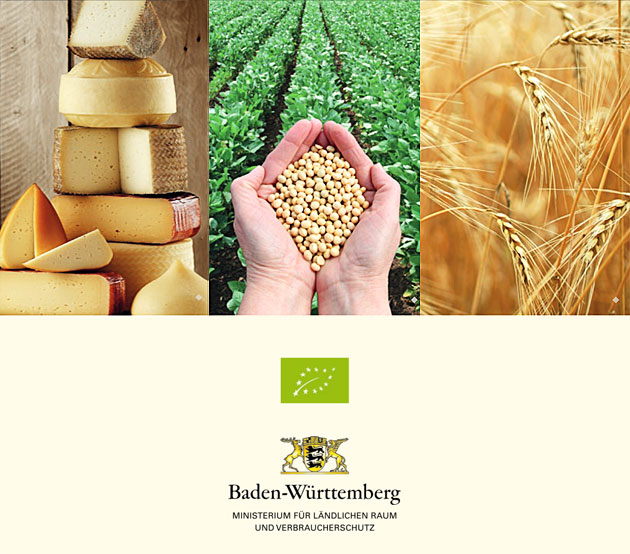 Genetic modifications, as in previous years, were rarely detected in organic foods. As before, only soy was affected. The percentage of positive organic soy samples as well as their level of genetic contamination was significantly lower than that of conventional soy.

As in previous years, there was a large difference between fruit and vegetables of organic and those of conventional production in terms of frequency of residue findings and quantities of chemical/synthetic pesticides. Almost 60 % of the organically grown samples were free of pesticide residues. In cases where residues were detected, the quantity was usually in trace amounts (< 0.01 mg/kg), significantly lower than the concentrations found on crops that had been treated with such substances.

The average amount of pesticide residues in all of the organic fruit samples was 0.002 mg/kg; all of the samples labelled as organic, including those that were falsely labelled, were included in the calculation. When the samples that were in violation, under the suspicion that they were either 100 %, or had been cut with, conventional goods, were excluded from the calculation, the average was 0.001 mg/kg. Conventional fruit, in contrast, contained 0.35 mg residues of pesticide per kg fruit, excluding the surface treatment substances phosphonic acid and bromide, an average 175 times higher than that of organic fruit. Organically grown vegetables contained an average of 0.002 mg/kg. Conventional vegetables, on the other hand, contained on average 0.49 mg pesticide residues pro kg (excluding bromide), a rate approximately 245 times higher than that of organic vegetables.

In 2015 only one sample of fresh organic fruit (a banana from Peru) and one sample of organic vegetable (broccoli from Italy) were judged as misleading due to the high amount of pesticide residues detected. All samples were in compliance with the valid MRL given by Regulation (EC) No. 396/2005. Altogether, the rate of violations from all fresh organic produce decreased further in 2015, to 1.1 % (1.3 % in 2014, 2.8 % in 2013).

There were more than twice as many violations among processed organic foods as among fresh products (2.6 % vs. 1.1 %).

In 2015 violations occurred in one sample of an organic fruit product (sultanas from Turkey) and two samples of dietary supplements (Moringa leaf powder from India). The labelling of the products as “organic” was judged to be misleading because they contained high levels of pesticides that are not authorized for use in organic farming, and were thus highly suspected of not having adhered to the legal guidelines for organic products. Moreover, all three cases exceeded the valid MRL established by Regulation (EC) No. 396/2005 for one or more substances.

The Use of Fertilizers in Plant-Based Foods

To test the designation of „organic“, tomatoes, bell peppers and cucumbers were tested using stable isotope analysis. The difference between organic and conventional can be assessed by means of the isotope ratio of nitrogen, which allows for the determination of which fertilizer was used.  Fertilizers used in organic farming must be in compliance with EU guidelines, which do not authorize the use of mineral fertilizers for organic agriculture. If the analyzed isotope ratio is typical for mineral fertilizer, it will be concluded that the declaration of „organic“ was falsely made.

Feed given to Dairy Animals

In 2015, 53 milk products (40 organic, 13 conventional) were investigated within the framework of the organic monitoring program. The differentiation approach is based on the feed given to dairy animals. The combination of the carbon stable isotope ratio and the amount of linolenic fatty acid in milk fat have proven to be suitable parameters for an analytical substantiation of the differentiation between organically and conventionally produced milk. The differentiation can be confirmed by nuclear magnetic resonance spectroscopy (NMR). None of the analyzed organic milk products showed conspicuous values.

Random analyses of the mycotoxin patulin in apple juice have been carried out on a routine basis at CVUA Sigmaringen for several years.  As part of this year’s organic monitoring project 28 samples of organic apple juice were examined for patulin contamination. A comparison with 56 samples of conventionally produced apple juice showed a similar percentage of samples that were contaminated, but a significantly lower amount of patulin in the organic samples.

Tropane alkaloids (TA) are a group of more than 200 compounds that are formed by different types of plants for self-protection, and which can cause health impairment in humans. TA can occur in cereals such as millet and buckwheat as a result of contamination from foreign seeds, such as the seeds from henbane or thorn apple. In a November 2013 official statement regarding tropane alkaloids in cereal products, the Federal Institute for Risk Assessment (BfR) confirmed the acute reference dose (ARfD) of 0.016 µg/kg body weight for the sum of atropine and scopolamine, established by the European Food Safety Authority.

Analyses regarding tropane alkaloids in cereals, especially millet and buckwheat and their products, were intensified in 2015. The reason for this intensification was the high amount of residues found in baby foods containing millet in the autumn of 2014, which resulted in a recall of the products.  In our investigations 63 of the 65 analyzed samples were detected with amounts under the limit of detection of 0.5 µg/kg. Only two of the organic samples (buckwheat flour and millet seeds) contained small amounts of tropane alkaloids, less than 5 µg/kg.

Pyrrolizidine alkaloids (PA) are secondary plant substances in many types of plants worldwide that are formed to protect the plants from pests. These plants are weeds, and can inadvertently end up in plant-based foods such as herbal teas.

Due to their health-damaging potential, especially 1,2-unsaturated PAs pose a health concern if they occur in food and feed. Based on the BfR’s assessment, long-term consumption of products with high amounts of PA presents a risk of health impairment.  Recommended is, therefore, not to exceed a daily maximum intake of 0.007 µg PA/kg body weight.
Analyses were conducted on 16 samples each of organic and conventional herbal teas, especially favorites such as peppermint and chamomile, as well as fennel, which is often used for digestive problems. Overall, the average amount of PA detected in the organic teas was significantly lower than in the conventional teas. However, PA in amounts of up to 40 µg/kg were detected in organic fennel teas, whereby none of the five conventionally produced samples contained any PA.

The preservatives natamycin and sorbic acid are authorized for use in conventionally produced, ripened cheese for the surface treatment of sliced and hard cheeses. They hinder the growth of unwanted microbes, such as yeast and mold.  The use of preservatives must be labeled on the packaging. For organic cheeses, however, these substances are forbidden.  Benzoic acid and their salts are not authorized for any cheeses. As part of the organic monitoring program in 2015, 36 samples of hard cheese were analyzed for natamycin, 26 of which were additionally investigated for sorbic and benzoic acid. These included 23 samples of organic cheese and 13 conventional. Fortunately, none of the analyzed samples had been preserved with the above-mentioned substances.

Pesticide and Biocide Residues in Textiles

In this reporting year in Baden-Württemberg a total of 36 samples of cotton textiles were investigated. These included 25 articles of baby clothing that were analyzed for genetically modified cotton and a further 11 articles that were checked for residues of pesticides and biocides.  We are happy to report that were only found in very small quantities. In addition, after only one attempt at hand-washing the articles, the residues from some of the biocides were completely washed out. In two of the 18 samples declared to be organic cotton, cotton genes were able to be isolated and tested for genetic modification. Genetic engineering is not to be expected in organic textiles. International standards such as GOTS® preclude the processing of GM cotton.

Detailed information (including results tables) can be found in the German version of the monitoring report .
If you have any questions concerning the report on the Organic Monitoring Program of Baden-Württemberg, please don’t hesitate to contact us.