Residues and Contaminants in Fresh Fruit from Conventional Cultivation, 2018

The analysis of fresh fruit from conventional cultivation shows almost no change in the residue situation. Every 14th sample was in violation due to an exceedance of the maximum level. Three of the analyzed samples contained pesticides in amounts that pose a health risk. Residues were found in 95 % of the samples. Washing the fruit with warm water before eating removes some of the residues.

The rate of detection for chlorate lay much lower than that for vegetables. When formal rejections due to chlorate are not included, the number of violations lies at 36 samples, with an MRL exceedance rate of 4.6 %.

Maximum residue levels (MRLs) are not toxicological endpoints or toxicological limits. They are derived from residue investigations carried out under realistic conditions. The expected residues are then compared with toxicological limit values, in order to ensure that lifelong or a one-time intake of the substance does not pose a health risk. Maximum residue levels regulate trade, and are not permitted to be exceeded.
Food containing residues above the MRL are not marketable; they may not be sold. Not every exceedance of an MRL poses a health risk, however. It is therefore important to make differentiated observations.

All of the samples were routinely analyzed using the QuEChERS  multi-method and QuPPe method (for very polar substances; see also http://quppe.eu) for over 750 substances. Table 1 gives an overview of the analyzed fruit samples, itemized by country of origin.

* The comparatively high levels of fosetyl (sum), bromide and surface treatment agents (thiabendazole, imazalil and o-phenylphenol) strongly affect the average quantity of pesticides per sample. Therefore, the average amount is also provided without these substances.

In 2018, almost all of the fruit samples (95 % of 745) contained residues. According to the official definition of residues (see Annex 4), 192 different pesticide substances were detected; when all metabolites and contaminants are included, this comprises more than 200 individual substances.

An average of 5.8 different substances was detected per sample. Excluding fosetyl (sum), bromide, and the surface treatment agents thiabendazole, imazalil and ortho-phenylphenol, which are often found on the peel of citrus fruits and to some extent on stone and exotic fruits, the average amount of pesticide residues was 0.40 mg/kg.

Three of the analyzed fruit samples from conventional cultivation contained amounts that exhausted the ARfD established by the European Food Safety Authority (EFSA) PRIMo Model by 100 %:

The pear sample with nicotine residues was determined to be unsuitable for human consumption, according to Article 14, Para. 2 b VO (EC) No. 178/2002.  (See also „Nicotine in Food – What Does Smoking Have To Do With It?“). Whether eating the pineapple and mango samples poses an acute health hazard is difficult to judge because, in accordance with the legally established definition of residues, these fruits must be analyzed together with their peels. A reliable risk assessment for the edible parts of the fruits is therefore difficult.

For the evaluation of pesticides that have a high, acute toxicity and that can cause health damage after just a single or short-term intake, the Acceptable Daily Intake (ADI) value is only appropriate to a limited extent. Since the ADI is derived from long-term studies, it is possibly inadequate as a measure of acute risk from residues in food. Therefore, in addition to the ADI value, a further exposure limit has been established, the so-called acute reference dose (ARfD). The World Health Organization defined the ARfD as the amount of a substance one can consume over the period of one day or in one meal without resulting in any discernible health risk. Other than for the ADI, the ARfD value is not determined for every pesticide, but only for such substances that, when taken in sufficient quantities, could cause damage to one’s health even after just one exposure.

Table 2 shows an overview of the analytical results for different fruit groups.

** Individual samples contained more than one substance exceeding the MRL

Citrus and exotic fruits contained the most exceedances of the MRL. Annex 1 lists the MRL exceedances in conventionally produced fresh fruits; Annexes 2 and 3 show the frequency distribution of the detected substances.

Presentation of Results for Specific Types of Fruit

Conventionally produced apples and pears often contain pesticide residues.  A total of 51 apple samples were analyzed, 37 of which came from Germany. Only one German sample was free of any detectable residues. A further 48 pear samples were examined, 11 from Germany. Only one pear from Italy was residue free. The substances most often detected in pears and apples were captan (fungicide), chlorantraniliprol (insecticide) and phosphonic acid (fosetyl, sum; fungicide).

Citrus fruits contained an average of 6.4 different substances and 0.32 mg pesticide per kg (average quantity of pesticide excluding fosetyl, sum; surface treatment agents; and bromide) (Table 6).
When the surface treatment substances thiabendazol, imazalil and orthophenylphenol, often applied to the peel of citrus fruits in large amounts, are included in the calculation, the average comes to 1.3 mg pesticide per kg.

Exotic fruits contained an average of 3.3 different substances and 0.37 mg pesticide per kg (excluding fosetyl, sum; surface treatment substances and bromide). Fortunately, the situation regarding pomegranates improved: last year 36 % of the pomegranates (mostly from Turkey) were in violation for exceeding the MRL. In 2018 this rate was significantly lower, at 13 %.

The highest number of substances was found in a sample of table grapes from India, with 20 different substances, followed by sweet cherries from Turkey, with 19 substances.

The residue findings are strongly dependent on the type of sample and their country of origin. Since the particular focus and risk-oriented questions are different each year, the results from one year cannot be seen as representative of the general situation.

When making comparisons of the number of pesticide substances used, one must consider that the individual cultures are grown in different climate zones, and are thus exposed to different degrees of pressure from pests. It is therefore necessary to take individual, often different measures of plant protection.

Fully 47 % (372 samples) of all the analyzed fruit samples from conventional cultivation were detected with phosphonic acid, calculated as fosetyl, sum, (in German blackberries) in amounts up to 48 mg/kg. Fosetyl per se was only detected in four samples (2x table grapes, strawberries and blackberries), whereby phosphonic acid was always found in these samples (see Table 8). Violations occurred in 11 samples (1.4 %) due to exceedances of the maximum for fosetyl, sum (see Annex 1).

Both fosetyl and phosphonic acid are fungicides that are permitted for use in the EU, and fall under the applications area of Reg. (EC) No. 396/2005, regardless of their path of entry.

In addition to the use of a fungicide, another feasible means of exposure could have been via leaf fertilizers that contained phosphonates (salts of phosphonic acid). The “new” categorization of phosphonic acids as a fungicide precludes this application, however. There are some indications that plants retain the phosphonic acids, only eliminating them over a period of some years.

The presence of chlorate residues in plant-based foods can have causes other than its application as an herbicide (see Info Box). In fruit, however, chlorate findings play a very minor role in comparison to vegetables (see Illustration 4). Just 19 samples (2.4 %) were in violation due to an exceedance of the MRL for chlorate; for vegetables it was 18 % in this reporting year.

Chlorates are effective as both herbicides and biocides. Since 2008, however, chlorate is no longer authorized for use as a pesticide* in the EU. Sodium chlorate may also no longer be used in biocide products.

The definition for „pesticide residues“ in Regulation (EC) Nr. 396/2005 also encompasses residues from pesticidal substances in food (including substances no longer authorized) that have pathways other than from the use of plant protectors (so-called dual-use substances), such as chlorate in food. Chlorate is thereby covered by the EU-wide valid default MRL of 0.01 mg/kg, in accordance with Reg. (EC) Nr. 396/2005. In December 2017 in Germany maximum values were determined for the treatment of drinking water when the disinfection can’t be otherwise guaranteed: 70 µg/L chlorate for long-term application and 200 µg/L chlorate for a short-term dosage.**

The presence of chlorate in food can result not only from its use as a pesticide, but also due to environmental pollution (contaminated rain- or irrigation water and soil), or as a residual of food production techniques, including methods used in farming, processing, preparation, or treatment.  The application of biocides, from which chlorate can result, is another possible source of contamination. In general, chlorate can be formed as a by-product of the disinfection of drinking/ industrial water with chlorine gas, hypochlorite, or chlorine dioxide.

Chlorate inhibits, reversibly, the intake of iodine into the thyroid gland and can cause unwanted health effects, especially in sensitive people such as children, pregnant women, or people with thyroid dysfunction. In addition to affecting thyroid function, chlorate can also damage the erythrocytes (formation of methaemoglobin, haemolysis)***.

The member states are carrying out a monitoring program to determine the degree of food and drinking water contamination, in order to provide data for a toxicological evaluation by the European Food Safety Authority (EFSA). Specific residue MRLs will then be established based on this information.

* 10 November 2008 decision of the Commision regarding the non-inclusion of chlorate in Annex I of the RL 91/414/EWG of the Council and the repeal of authorization for pesticides containing this substance (ABl. L307/7 from 18.11.2008)

*** Federal Institute for Risk Assessment (BfR), Recommendations of the BfR for health-based assessment of chlorate residues in food, from 12 May 20144, accessed on 6 Feb. 2019

The European Food Safety Authority (EFSA) derived an acute reference dose (ARfD) for chlorate of 0.036 mg/kg bodyweight. Applying EFSA’s EU-based PRIMo-Model for young children and a variability factor of 1, none of the samples exceeded the toxicological reference value. There was, therefore, no acute health risk. Nevertheless, the Federal Institute for Risk Assessment (BfR) recommends continuing efforts to reduce the possible entries of chlorate into the food chain and the resulting risk to consumers [1]. Analyses of chlorate residues will continue in 2019.

Annex 2: Frequency of detection of the most important substances* for fresh fruit, by type of fruit, as percentage all analyzed samples (CVUAS, 2018) 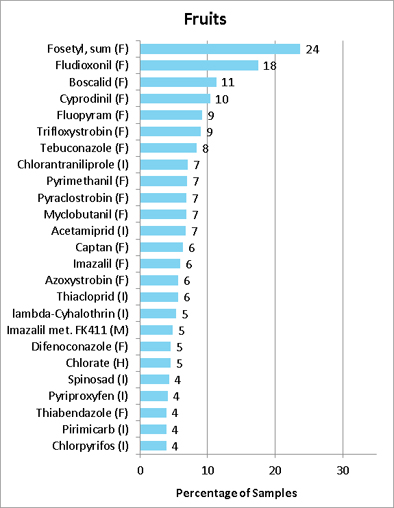 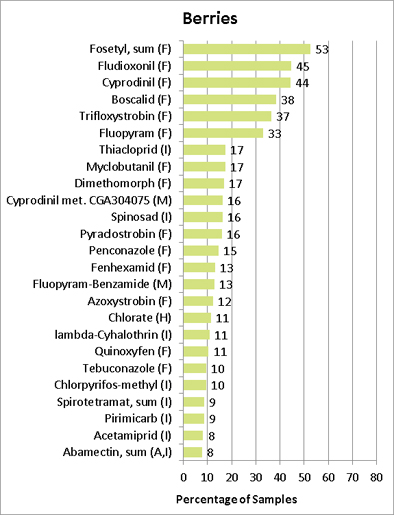 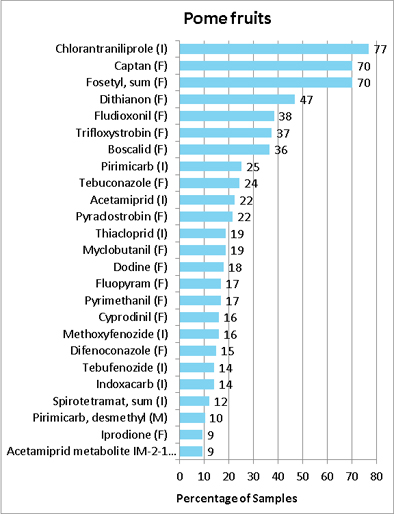 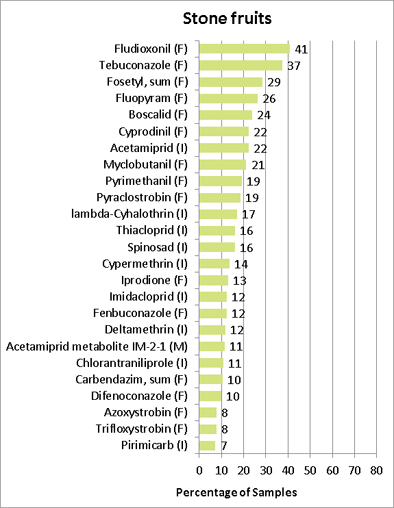 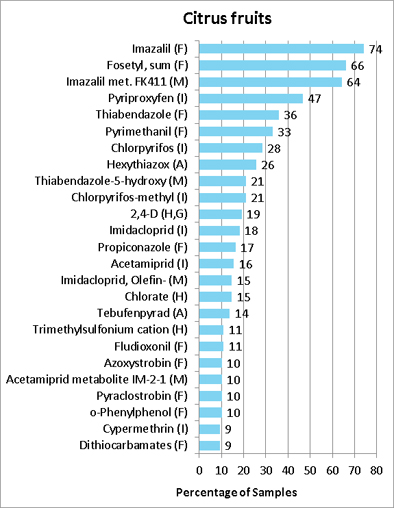 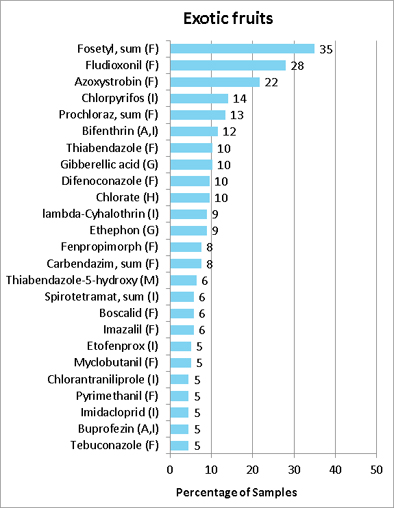