In a special project conducted between November 2018 and June 2019, CVUA Stuttgart analyzed commercial, crushed oregano with regard to a number of different issues.

Part I of the investigations reported on the extraordinarily high contamination of oregano with liver-toxic pyrrolizidine alkaloids (PA). Part II presents the results of our pesticide analyses and shows that products sold exclusively as crushed oregano sometimes include plant parts other than that of this popular culinary herb. As already found in the case of PA (71 % violation rate), the investigations into pesticide residues and foreign plant materials have delivered highly unsatisfactory results. Approximately one-third (29 %) of the oregano samples contained pesticides and con-taminants in amounts that exceed the legal maximum levels or reference values (for perchlorate). Furthermore, 20 % of the samples had to be judged as fraudulent, because they were adulterated with high amounts of olive tree leaves and/or rockrose. One “oregano” sample contained as little as 35 % oregano, with the remaining 65 % identified as olive leaves.

What did we analyze?

In the Mediterranean kitchen oregano (Origanum vulgare L.; see Illus. 1), also called wild marjoram, is practically indispensable as a seasoning for pizza or pasta sauces due to its strong, aromatic-herbal taste. This popular herb is usually used in dried, crushed form, but is also often part of herbal mixes and processed products. Minced herbs such as crushed oregano usually contain various parts of the plant, such as leaves, buds, petals or stems. Recently, however, it has been repeatedly reported in the media that especially oregano is often adulterated and cut with foreign plants, such as myrtle, olive, rockrose or sumach [1–5]. With such small pieces consumers often have no realistic possibility of recognizing any intentional or unintentional foreign plants, much less removing them (see Illus. 2). This is even more impossible for processed foods or mixed herbs containing oregano [1].

The analyses focused on pure, crushed oregano. While Part I of the report focused on levels of liver-toxic pyrrolizidine alkaloids (PA), this section focuses on the analyses of residues from over 750 different pesticides and contaminants, as well as the determination of fraudulence due to the presence of foreign plant material. A total of 41 samples of crushed oregano were analyzed (each having previously been analyzed for PA), taken from individual stores and wholesale markets as well as food processing plants. Twenty of these samples were checked morphologically with tweezers and a magnifying glass for foreign plant parts such as olive leaves.

According to the German Food Code guideline for herbs and spices, the appearance of every seasoning is distinctive. There are to be no insect-bitten pieces, insects, foreign plant pieces, or other visible contaminants beyond that which is unavoidable. In accordance with general business practices, oregano is sold in the form of dried, usually crushed, leaves with blossoms and the outermost parts of the stem of the Origanum vulgare L. from the labiate family (Labiatae or Lamiaceae) (Illust. 2). Dried oregano has a yellowish to greenish coloring. Orange-brown droplets of oil found on the surface of the hairy leaves contain the characteristic, aromatic essential oils of oregano (Illust. 3).

The analyses conducted by CVUA Stuttgart substantiate that products sold on the market as „oregano“ don’t always contain oregano alone. Four of the 20 samples (20 %) analyzed for the presence of foreign plant parts were detected in some cases with high amounts of olive leaves (Olea europaea L.) and/or rockrose leaves (Cistus sp.) (Illust. 2). The detected amounts of foreign plant fragments varied between 24 % and 65 %. Two of the “oregano” samples, consisting of 58 % and 65 % foreign plant parts, could be best designated as “partially oregano”. 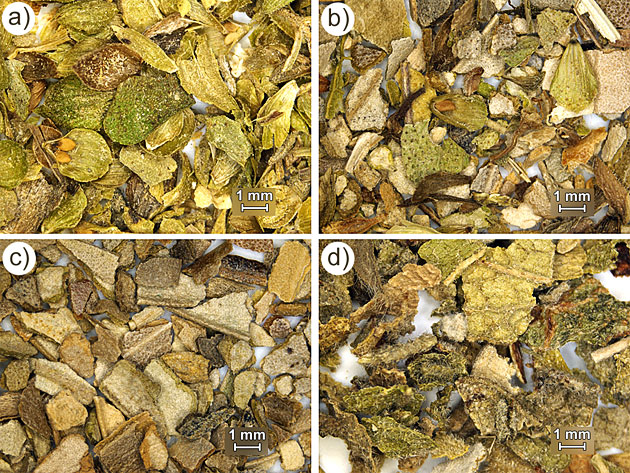 While the olive tree (Illust. 1b) may be familiar to many consumers from their summer holidays, the bushy growing rockrose (Illust. 1c), with its mostly white or crimson blossoms, is probably not well-known in this country. Rockrose bushes as well as olive trees are typical Mediterranean vegetation, and grow in wide areas of the Mediterranean region. As such, they are quite at home in the most important farming areas for oregano.

It is unlikely that the presence of olive and rockrose leaves at the time of cultivation and harvesting of oregano was unintentional, given the amounts of up to 65 % and the basic differences in the plants’ growth forms. It is much more probable that these were the result of an intentional admixture, with the purpose of maximizing profits. In other words: food fraud.

Due to the significant adulteration of the oregano with olive and/or rockrose leaves (Illust. 2), the effected oregano samples were judged to be fraudulent in terms of their identity and composition. The admixture of olives or rockrose leaves to oregano is not associated with an increased health risk for the consumer. Both olives and rockrose can be used in the preparation of tea. Given the lack of characteristic taste and fragrance of these leaves, however, their use as a culinary seasoning would be rather unusual.

Even if it is difficult for the consumer to recognize crushed oregano that has been adulterated with foreign plant parts, some parts of olive and rockrose leaves can be easily identified due to their specific morphological characteristics. Fragments of olive leaves, for example, exhibit a kind of waffle-shaped structure, with fibrous edges. Moreover, olive leaves are characterized by a smooth surface, with a greyish-green upper side and a greyish, shiny under side. In contrast to oregano, olive leaves have neither oil drops, nor hairiness (Illust. 3). Fragments of the rockrose show, on the other hand, an uneven, crocodile-like skin, with a dark-green surface covered by star-shaped bushels of hair. Like olive leaves, rockroses have no oil drops (Illust. 3).

Residues of Pesticides and Contaminants

A total of 41 samples of dried, crushed oregano were analyzed for residues of over 750 pesticides (including chlorate) and contaminants (perchlorate), 100 % of which were found to contain a total of 38 different pesticide substances and perchlorate.

Pesticides that are effective as weed-killers (2,4-D, fluazifop and pendimethalin) as well as insecticides from the substance class of pyrethroids (cypermethrin, lambda-cyhalothrin and deltamethrin) were most frequently detected. All of the samples were also found with the contaminant perchlorate. A total of 38 of the 41 samples (93 %) were found to contain multiple residues; that is, more than one type of plant-protection substance was found at one time in these samples. An average of 5.1 different substances was detected per sample. The relevant residue findings are presented in Table 1.

Residue amounts exceeding the legally established maximum levels (including chlorate) or reference values (perchlorate) were found in 9 of the 41 samples (29 %). Three of these samples contained more than one exceedance of the MRL, however. In addition to the herbicide fluazifop (4 samples above the maximum level (>MRL)), the insecticide substances cyfluthrin (3 samples >MRL), pyriproxyfen (2 samples >MRL) and chlorpyrifos (1 sample >MRL) are also especially relevant.

Maximum amounts for residues are no toxicological end points or toxicologically-based limit values. They are derived from residue experiments, conducted under realistic conditions. Therefore, a comparison of the expected residues with the toxicological limit values is made, in order to evaluate health safety both by long-term and a one-time intake of the substance.

Food with residue quantities higher than the maximum level is prohibited from being marketed. Not every exceedance of maximum residue levels presents a health risk, however. Thus, each case should be considered individually [6].

Chlorate and perchlorate were also found, in quantities above the legal maximum amounts in one sample each; for perchlorate, the amount was above the reference value. Chlorate residues in plant-based foods can stem from the no longer legal application of chlorate as an herbicide; however, these can also come from other sources. Chlorate can also end up in food as a result of environmental pollution (contaminated rain- or irrigation water and soil) or as a residual of food production techniques (e.g. farming, processing, preparation, or treatment). Perchlorate is a contaminant from the environment, fertilizer, or artificial irrigation, and not from a plant protection substance. For this reason, there are and have been no legal maximum levels established. To be able to guarantee the marketability of a food, temporary EU-wide reference values for perchlorate were established instead.

Further information regarding chlorate and perchlorate can be found here:

The results of the pesticide analyses show conspicuously frequent findings of herbicides, especially fluazifop (4 samples >MRL), suggesting that combating weeds in oregano cultivation sites is a challenge. This assumption is supported by the consistent, very high quantities of pyrrolizidine alkaloids (PA) in oregano, which indicates an unintentional co-processing of PA-forming foreign plants with oregano and a widespread weed problem in oregano cultivation (see Part I of this report). It is not surprising, therefore, that two of the samples had to be reported for violation due to high PA levels as well as the exceedance of the MRL for fluazifop.

In contrast, the frequent insecticide findings in oregano are directly related to the above-mentioned problem of falsification. From the five out of six samples that exceeded the MRLs for insecticides (2x cyfluthrin, 2x pyriproxyfen, 1x chlorpyrifos) two oregano samples were falsified by the presence of high quantities of olive leaves (58 % and 65 %). It is noteworthy, that the respective substances belong to a range of common insecticides that are used intensively in olive groves for the reduction of quality and revenue losses resulting from the destructive olive fruit flies.

In light of the analyses performed by CVUA Stuttgart on crushed oregano, the overall picture of the state of this popular culinary herb is most unsatisfactory.

Part Iof the report already described the consistent, very high quantities of genotoxic and carcinogenic pyrrolizidine alkaloids (PA) that dried, crushed oregano is contaminated with (average value: 6.160 µg/kg: median: 5.430 µg/kg). Due to contamination resulting from the unintentional co-harvesting of PA-forming foreign plants, almost every second sample of oregano had to be judged as unsuitable for consumption and a further 21 % as injurious to human health (the total rate of violations due to high PA levels was 71 %).

The analyses of pesticides and foreign plant material are now showing further problem areas. Every fifth sample of oregano (4 of 20 samples; 20 %) was detected with the admixture of olive and/or rockrose leaves, an unacceptable deception of consumers. The quantities of inferior foreign plant material in the samples labeled as „oregano“ amounted to 24 %, up to the enormous amount of 65 %. Pesticide amounts above the legally established maximum levels were detected in 9 of the 41 analyzed oregano samples. Compared with other fruit or vegetables, this rate of 29 % is conspicuously high. Even if the detected pesticide amounts don’t present a toxicological health risk to consumers, marketable they are not. Especially disconcerting for the consumer is the fact that a total of five (12 %) of the analyzed samples of crushed oregano were in multiple violation. Two of these cases were rejected not only for containing high quantities of health-damaging pyrrolizidine alkaloids and pesticides exceeding the MRL, but also for significant adulteration from olive and rockrose leaves.

To summarize, the investigations clearly show that the general state of dried, crushed oregano requires urgent action. Thus, to guarantee a supply of flawless food products, producers and traders should strengthen their own inspection of oregano batches in the realm of due diligence, before marketing and further processing the wares.

Consumers that don’t want to risk these problems with crushed oregano would be better off, for the time being, using fresh oregano from a pot or from their own garden, and then drying it themselves.