Insect Spray as Contaminant in Food: Incidence and Legal Assessment

Report from a day in the lab

Everyone knows that uncomfortable feeling you get when mosquitoes are swirling around you. Many people resort to using insect repellents when they spend time in nature; ultimately, mosquitoes can transmit illnesses. This also applies to people who gather wild fruits or harvest cultivated foods.

Two of the most effective artificial ingredients in insect repellents have been the focus of investigations by the pesticide laboratory at CVUA Stuttgart for 10 years: diethyltoluamid (DEET) and icaridin (see report, in German, on our investigations into pesticide residues in mushrooms and their products in 2009, entitled „Rückstände von Pflanzenschutzmitteln in Pilzen und Pilzerzeugnissen im Untersuchungsjahr 2009“). It is hardly surprising that we mainly find residues in products that have been gathered or harvested by hand. 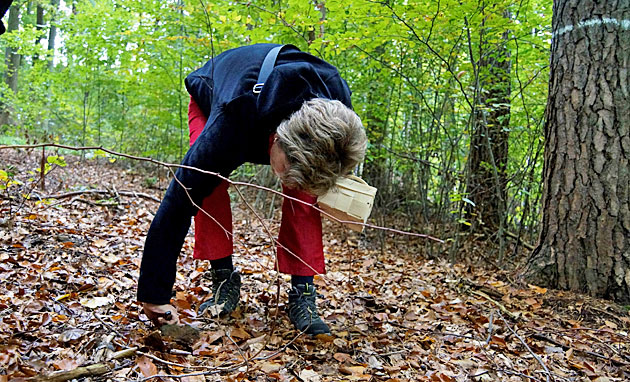 What have we analyzed?

Wild mushrooms, however, are especially affected; 50 % of the analyzed samples were detected with DEET, followed by 16 % of tea and tea-like products (see Table 1).

Icaridin was detected in significantly fewer samples, mostly in only trace amounts. The findings affected mainly berries and leafy vegetables from Germany. Only two samples of strawberries from Germany and Spain contained quantities greater than 0.01 mg/kg.

Biocides are substances and preparations that are not only effective against insects and mice, but also against algae, mushrooms and bacteria. In addition to their use in agriculture, biocides are also used in domestic and commercial areas.

Biocide substances are approved throughout the EU, and are recorded in a positive list. Authorization for biocide preparations occurs in the individual member states as well as EU-wide. Depending on the area of application, biocides are divided into different groups. There are currently about 25,000 biocide products on the market in Germany [1,2].

Plant protection substances used in agriculture are also approved EU-wide and are recorded in a positive list [3]. Substances that are categorized both as a pesticide and a biocide are termed "Dual-Use" substances. In accordance with plant protection law, the legally established maximum residue levels for foods also apply to these substances, regardless of how they end up in food [4].

The term „repellent“ comes from the Latin word „repellere“, meaning to repel. Repellents are usually recognized by their smells, and drive away mosquitoes and gnats as well as ticks. There are also repellents that are effective against mammals such as dogs and cats, game and mice.

Preparations against mosquitoes and ticks made from the essential oils of different plants often work for only a short time. Synthetic compounds such as DEET or icaridin, however, can act as a deterrent for several hours [5].

How are the substances and findings toxicologically assessed?

The amount of biocide contained in repellents is between 20% and 50%. These are usually applied directly onto the skin. DEET absorbs well into the skin, whereas Icaridin has a lower absorption rate and is generally better tolerated by the skin. The substances and preparations have been checked in terms of their adherance to biocide regulation [2] and have been approved for use. There are indications, however, that DEET‘s mechanism of action not only rests on odor deterrence; as with some insecticides, it also inhibits the enzyme cholinesterase, which can increase the effectiveness of insecticides [6].

More recent investigations into Icaridin have shown that even small amounts that end up on surface waters can damage amphibiens [7]. Whether these newer observations will be confirmed or other findings be made is yet to be seen.

Trace amounts detected in food that are too low for calculating meaningful percentages are not toxicologically relevant. In 2009 the Federal Institute for Risk Assessment (BfR) published an opinion on DEET contamination of chanterelles from Eastern Europe, stating that an amount of 1 mg/kg did not present any health risk. Animal tests show this amount to be far from a level that would cause any detrimental effect [8].

How are the findings to be legally assessed?

As biocides, these substances do not fall within the area of EU law for pesticides; they are not „dual-use” substances (see Info Box). However, according to national law, substances used to combat bugs which are not related to plant protection are nevertheless subject to a default maximum level of 0.01 mg/kg [11].

According to § 68 LFGB (German Food and Feed Code), every commercial enterprise can apply for an exception for a specific substance from the German Office of Federal Consumer Protection and Food Safety (BVL). Such an exception is only valid for individual cases and specific products, as specified by the applicant. Exceptions are investigated by the BVL and authorized only when there is no health risk to be expected [12]. In the case of DEET several different companies have received exceptions for e.g., chanterelle mushrooms, blueberries, chili peppers and pine nuts. The authorized exception is given for a specific business and product, and also specifies the level of residues with which the product can be marketed – the default MRL of 0.01 mg/kg is not valid for products given exceptional authorization.

Table 2 depicts the samples containing quantities of DEET and Icaridin greater than the valid maximum amount of 0.01 mg/kg. Samples with possible authorized exceptions are not included.

It is especially noteworthy that in 2019 two samples of berries from Germany were detected with higher amounts: raspberries with 0.39 mg/kg DEET and strawberries with 0.14 mg/kg Icaridin. The defective spray-helicopters and resulting „mosquitoe plague“ in Rheinauen may play a role here [13]; the two samples were taken from Baden in June 2019, at the time of this occurrence.

What changes to the legal requirements are planned?

The national maximum amounts based on the RHmV (the German regulation for maximum residue levels) are currently under discussion and are on the verge of change. There are no general maxiumum levels provided for biocides in EU law. Maximum levels are only issued out of absolute necessity when, for example, consumer health is at stake. From our point of view this is a deterioration of protection, not only for local consumers, but also for the local food industry and food monitoring program; the limit values provide a measure of necessary legal protection!

In the future so-called reference values should be valid for domestic trade within Europe, although they are not legally binding. There is an agreement that goods containing amounts under the agreed-upon reference values can be marketed within the EU without limitation. If the concentration of residues exceeds the reference values, however, the responsible authorities must decide on possible follow-up measures [14].

Even if foreign substances are categorized as toxicologically safe, they are unwanted in our food and should be avoided or reduced as much as possible (ALARA principle: as low as reasonably achievable - see Info Box). But what is possible?

Contaminants are unwanted substances that unintentionally end up in food as a result of environmental pollution or as residues from production methods such as manufacturing, processing, preparation, and treatment. Many substances used in industry such as PCBs and heavy metals as well as unintentional by-products such as dioxins are in the environment and, depending on their characteristics, can end up in or on food or even become enriched. Other unwanted substances occur when food is not properly manufactured or treated (e.g. PAKs, nitrosamines) or the growth and/or harvest conditions are not appropriate (e.g. PAKs, nitrosamines, fungal and bacterial toxins).

In general, a minimization imperative is valid for contaminants, as stipulated in Regulation (ECG) No. 315/93. The level of contaminants in food shall be kept as low as can reasonably be achieved (ALARA-Principle). Food containing  contaminants in an amount that is unacceptable from a public health viewpoint may not be marketed. Maximum levels stipulated in both Reguation (EC) No. 1881/2006 and in the national contaminant ordinance from 19 March 2010, among others, are intended for contaminants that could present a risk to consumers, based on current knowledge.

A laboratory experiment: which contaminants can be expected?

In a small laboratory experiment we wanted to find out whether and how much an insect repellent containing the substance DEET would be passed from hands onto a food sample, depending on the proper or improper use of the repellent.

We divided a sample of blueberries into six parts (500 gr. each) and applied the repellent as follows: 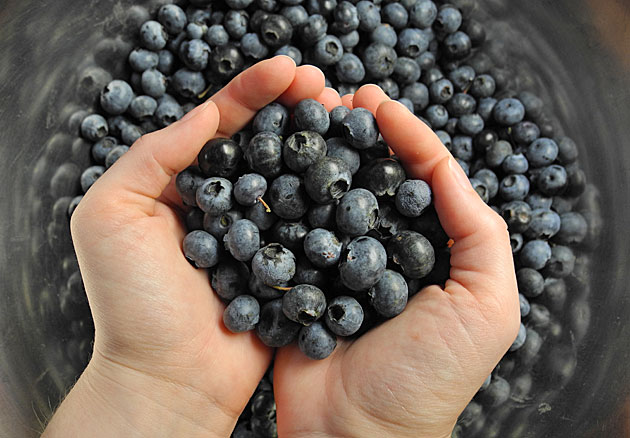 The spraying of the forearm and back of the hands was performed with a biocide spray used for mosquitoes and ticks (30 % DEET) following the instruction of 2 pump sprays for a hand-sized surface. The sample without any application was immediately frozen; each of the remaining blueberry samples were touched by the hands and then frozen and analyzed. The results of the experiment are presented in Table 4.

*the forearm and back of the hand were given 2 pumps of the spray each over a surface area the width of a hand; each blueberry was touched after the spraying

Even though this was just a model test which could have yielded different quantities when exposed to other conditions such as wind, there was nevertheless a significant trend to be seen. When the biocide was sprayed on the forearm and then rubbed in with the hands, 27.8 mg DEET/kg of blueberries was detected; this was the highest amount by far. When the hands were washed after having rubbed in the biocide, the amount detected on the blueberries was much lower, at 0.15 mg/kg. A lapse in time between spraying and touching the blueberries also resulted in a small amount (compare #s 2 and 3 in Table 4). When the sample was in direct proximity to the spraying, a high amount of biocide (7.3 mg/kg) also ended up on the food. With a concentration of 30% DEET, this is not surprising. Depending on distance and wind direction, the amount of DEET getting into food could therefore be either lower or higher.

Illustration 1: Contamination of blueberries with DEET, in a lab experiment at CVUA Stuttgart 2019; different applications of a biocide preparation with 30% DEET

The experiment shows that spraying oneself with a repellent and then touching food can certainly result in amounts comparable to those measured in our lab (refer to Table 2).  Spraying close to food and rubbing the biocide into the skin both lead to significantly higher amounts of biocide getting onto food.

Residues of DEET or Icaridin are found again and again on foods that were picked or gathered by hand. The residual contamination is usually the result of contact with the hands of the picker who had sprayed himself with a repellent. DEET and Icaridin are biocidal substances that are effective against mosquitoes and ticks; they are recommended in areas where insect-borne illnesses such as malaria or dengue fever are possible.

Now, at the beginning of autumn, some advice for all mushroom and blueberry gatherers:

when using repellents, please follow the instructions carefully. In addition to repellents containing synthetic substances, there are also insect sprays based on essential oils. The duration of these products’ effectiveness is much shorter, however. Wearing loose, light-colored clothing that covers the body can also help protect against insect bites. Our lab experiment shows that, especially when coming into contact with food after using an insect repellent, one should take the following precautions in order to minimize contaminating the food: wash your hands after applying a biocide product, wait awhile after spraying before before touching food, and make sure there is no food nearby when spraying.

[14] Summary Report of the Standing Committee on Plants, Animals, Food and Feed held in Brussels on 17 September 2018