Chlorpyrifos Is  OUT: This Insecticide May No Longer Be Used In the EU

According to an official opinion of the European Food Safety Authority (EFSA) in August 2019, the pesticide chlorpyrifos does not fulfill the criteria legally required for an extention of its authorized use in the European Union. Analyses show: this substance has an affect on human health. 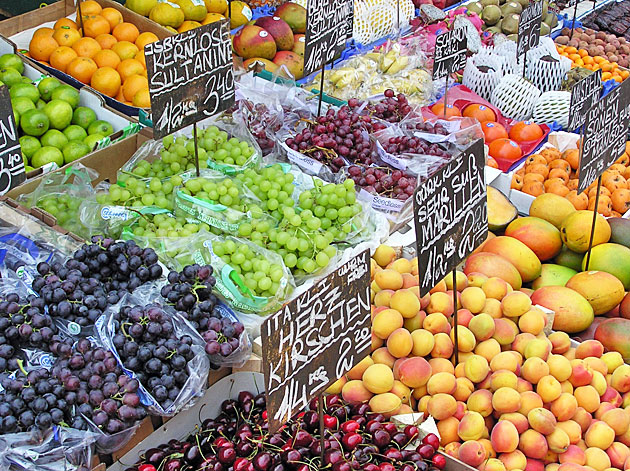 As early as May 2012 American researchers published findings in the Proceedings of the National Academy of Sciences (PNAS) that chlorpyrifos had a detrimental effect on brain development of the unborn [3,4]. But as so often happens, the results were initially doubted, the number of cases so small, the test controversial. Moreover, this substance has been on the market for 60 years and used in a variety of applications.

The insecticide and acaricide chlorpyrifos has been used to combat sucking and biting insects in agriculture, against storage pests, against ectoparasites in animal husbandry and in the household.

Chlorpyrifos belongs to the large group of phosphonic acid esters whose insecticide effect is based on an inhibition of the cholinesterase. Its triumphal march began after World War II. In contrast to the organochlorine compounds, which are persistent in the environment, organophosphates degrade very quickly. Although their acute toxicity is high ((E605 (parathion) won some dubious prominence in suicide cases because the inhibition of the cholinesterase especially leads to the cramping of the intestinal tract and can result in death due respiratory paralysis), their chronic toxicity is assessed to be rather low.

For the evaluation of pesticides that have a high, acute toxicity and that can cause health damage after just a single or short-term intake, the Acceptable Daily Intake (ADI) value is only appropriate to a limited extent. Since the ADI is derived from long-term studies, it is possibly inadequate as a measure of acute risk from residues in food. Therefore, in addition to the ADI value, a further exposure limit has been established, the so-called acute reference dose (ARfD). The World Health Organization defines the ARfD as the amount of a substance one can consume over the period of one day or in one meal without resulting in any discernible health risk. Other than for the ADI, the ARfD value is not determined for every pesticide, but only for such substances that, when taken in sufficient quantities, could cause damage to one’s health even after just one exposure.

Chlorpyrifos residues – what have we analyzed and what has changed since 2010?

Since 2010 we have analyzed about 20,900 samples of plant-based food from conventional production for residues of chlorpyrifos. Ten percent of the samples were detected with this substance and 51 (0.2 %) exceeded the then maximum valid level.

Citrus fruits were especially found to contain chlorpyrifos residues; 55 % of the analyzed samples contained detectable amounts, followed by spices, tea and nutritional supplements such as moringa.

Table 1 shows an overview of the results.

Calculations for country of origin show significant differences. While every second sample from China had chlorpyrifos residues, it has never been used in New Zealand (see Table 2). Only the countries with more than 50 analyzed samples are listed.

The rate of MRL exceedances is quite low, at 0.2 %. Table 3 shows the type of matrices and their countries of origin, which are quite diverse. The most conspicuous findings were those from Turkey, with 17 samples exceeding the maximum level (bell peppers, pomegranates, lentils, chili peppers, quinces, pickled wine leaves and lemons).

The highest rate of positive samples is among citrus fruits. We’ve analyzed approximately the same number of citrus samples over the past 10 years, so we can make a good comparison (see also Table 4 and Diagram 1).

Assessments must consider that chlorpyrifos is not a systemic substance. That means it isn’t taken up into the plant’s interior from the soil via its vessel system. A majority of the residues are on the peel, which normally isn’t eaten [6]. 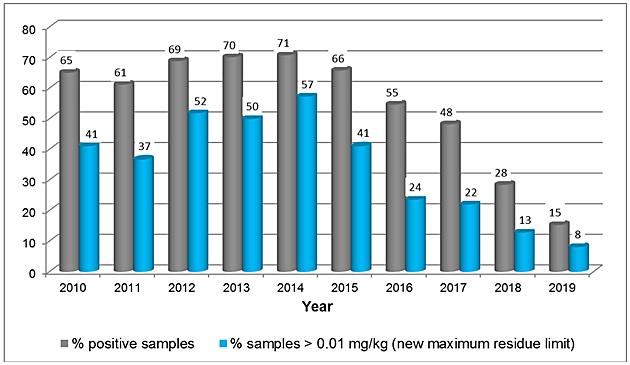 Diagram 1 presents the percentage of samples with quantifiable chlorpyrifos residues (gray columns). The samples that exceeded the „new“ residue MRL of 0.01 mg/kg (blue columns) were also calculated. A noticeable reductive trend can be seen from 2016; the new toxicological assessments from EFSA were carried out in 2014.

The situation for citrus fruits from Spain is even more notable. It is quite evident here that the producers reacted quickly and that, in the meantime, chlorpyrifos has been practically eradicated. 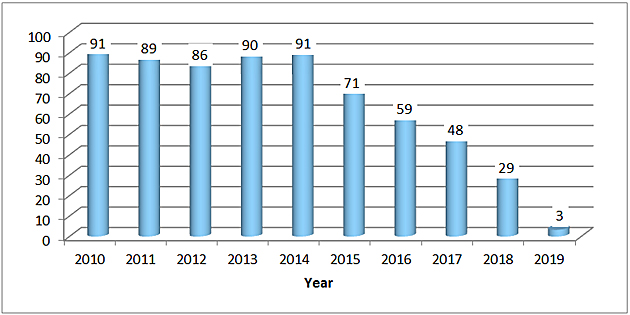 Of course, the interesting question for the consumer is which insecticide will now take the place of chlorpyrifos in Spanish citrus production (see Table 5).

As Table 5 shows, pyriproxyfen, chlorpyrifos-methyl and spirotetramat were frequently applied in 2019. EU authorization for chlorpyrifos-methyl was also not extended, however. This means that the Spanish citrus fruit producers will have to once again make adjustments.

We have analyzed about 4,000 samples of plant-based foods from organic production for residues of chlorpyrifos since 2010. Three percent of these contained this substance, albeit mostly in only trace amounts smaller than 0.01 mg/kg (see Table 6). Traces of substances can also occur in the end product as a result of drifting, cross-contamination during the harvest, packaging or marketing. Only 10 samples contained residues of 0.01 mg/kg or above (Table 7). All samples were in compliance with the valid MRLs.

Table 7 lists the samples from organic production that have contained chlorpyrifos in amounts of 0.01 mg/kg or above in the past 10 years, since 2010. These have mainly involved moringa, barley grass and camomile tea, products that undergo a drying process, which tends to concentrate the residues. This must be factored into the assessment, which resulted in all of these samples adhering to the legal guidelines.

Approximately 10 % of the conventionally produced samples analyzed over the past 10 years have contained chlorpyrifos residues, especially those coming from China, India, Vietnam and Turkey. Now the substance is no longer permitted for use in the EU and the maximum amounts will be set at the limit of quantification of 0.01 mg/kg.

Enormous efforts and the most stringent of requirements ensure that authorization is only given for pesticides that present no risk to our health. However, this is only possible within the realm of our current scientific knowledge. It is therefore meaningful and important that pesticides be regularly re-assessed. The list of substances that have lost this authorization over the years is long. Examples include old chloro-organic substances such as DDT and lindane; endocrine effective substances such as vinclozolin and procymidon; some phosphonice acid esters such as E605; and neonicotinoids such as clothianidin and pyrethroids, etc.

For consumers that are especially concerned about their health, organic produce provides an alternative. Although 3 % of our samples tested positive for chlorpyrifos, these were only in trace amounts, probably the result of drifting or cross-contamination.