Residues and Contaminants in Fresh Vegetables from Conventional Culture, 2019

Pesticide contamination of conventionally grown fresh vegetables in 2019 remains unchanged in comparison to previous years. Every 20th sample was in violation for at least one exceedance of the maximum residue level (MRL) and when the official violations due to chlorate are included, the rate increased to almost every 5th sample. Except for four samples (3x bell peppers and one kale), the detected pesticide amounts posed no health risk. German grown vegetables scored comparatively well. Our general tip: wash vegetables in warm water before eating them; this will remove some of the residues.

All of the samples were routinely analyzed for about 750 substances using the QuEChERS multi-method and the QuPPe method (for very polar substances; see also http://quppe.eu). Table 1 gives an overview of the analyzed fresh vegetable samples, itemized by country of origin.

When comparing the number of pesticide substances used, one must consider that the individual cultures are grown in different climate zones, and are thus burdened by pests to different degrees. It is therefore necessary to take individual, often different, measures of plant protection. An average of 4.7 different substances was detected per sample, although the local samples scored better, at 3.6 substances. Excluding fosetyl (sum) and bromide, the average amount of pesticide residues overall was 0.41 mg/kg and, for the German-grown samples, 0.37 mg/kg. The rate of German samples with pesticide amounts above the limit values was much lower than those from other countries, however. A closer observation of the countries with the highest rate of exceedances (>20 %) shows that not only third countries were represented, but also some European countries (see Table 2).

Maximum residue levels (MRLs) are not toxicological endpoints or limit values. They are derived from residue investigations carried out under realistic conditions. The expected residues are then compared with toxicological limit values, in order to ensure that lifelong or a one-time intake of the substance does not pose a health risk.

Maximum residue levels regulate trade, and are not permitted to be exceeded. Food containing residues above the MRL is not marketable; it may not be sold. Not every exceedance of an MRL poses a health risk, however. It is therefore important to make differentiated observations.

Four of the conventionally produced vegetables analyzed in 2019 contained levels that exhausted the Acute Reference Dose (ARfD) by 100 %, using the EFSA PRIMo-Model for the EU:

These four samples were judged to be unsafe and thus not suitable for human consumption ((Regulation (EC) No. 178/2002, Article 14, Paragraph 2b)).

For the evaluation of pesticides that have a high, acute toxicity and that can cause health damage after just a single or short-term intake, the Acceptable Daily Intake (ADI) value is only appropriate to a limited extent. Since the ADI is derived from long-term studies, it is possibly inadequate as a measure of acute risk from residues in food. Therefore, in addition to the ADI value, a further exposure limit has been established, the so-called acute reference dose (ARfD). The World Health Organization defined the ARfD as the amount of a substance one can consume over the period of one day or in one meal without resulting in any discernible health risk. Other than for the ADI, the ARfD value is not determined for every pesticide, but only for such substances that, when taken in sufficient quantities, could damage one’s health even after just one exposure.

Tables 3 to 7 show the results of residue analyses of vegetables, differentiated by type of vegetable. Annex 1 lists the MRL exceedances for conventionally cultivated fresh vegetables, and Annexes 2 and 3 show the frequency distribution of the detected substances.

Presentation of results for individual vegetable

Leafy vegetables contained an average of 5.1 different substances. With a rate of 0.71 mg pesticide per kg (average, excluding bromide and fosetyl (sum)), these had the highest residue amount of all types of vegetables. In particular, many herb and lettuce samples contained numerous as well as high amounts of pesticides. The highest number was a sample of parsley from Germany, which contained 16 different substances (see also Illustration 1).

Most of the MRL exceedances of leafy vegetables concerned chlorate, although these amounts did not result from an application of an herbicide (see section on chlorate).

Fruiting vegetables contained an average of 5.5 different substances per sample, but only 0.16 mg pesticide residues (excluding bromide and fosetyl (sum)), which means the detected substances are often found in only small concentrations. This doesn’t necessarily mean, however, that fruiting vegetables are treated less often or with lower concentrations of pesticides than other types of vegetables during vegetation. Rather, it has become much more common to wash vegetables after the harvest, thereby removing pesticide residues. In the last few years, after-harvest treatment has become more and more automated and wide-spread.

Many of the bell peppers, zucchini, tomatoes and aubergines contained several pesticides. The frontrunners were a sample of chili pepper from Pakistan and a bell pepper from Turkey, each with 18 different substances (see also Illustration 1).

Root vegetables contained an average of 4.4 substances per sample and a comparatively low level of pesticide residues of 0.076 mg/kg sample (average pesticide amount excluding bromide and fosetyl, sum). The detected substances were often found in only trace amounts.

A majority of the vegetable samples were also detected with multiple residues in 2019; 732 of the samples (80 %) contained multiple residues. Illustration 1 depicts the number of pesticides found in the different types of vegetables.

The residue findings are closely related to the type of samples analyzed and their country of origin. Since the particular focus and risk-oriented questions are different each year, the results from one year cannot be seen as representative of the general situation, and are only minimally comparable.

When more than one pesticide substance is detected on or in food, this is referred to as multiple residues. There are several conceivable causes for the occurrence of multiple residues. In addition to the use of different substances during the growth phase to combat various pests, they can also stem from, e.g. the application of combination therapies containing several substances, or an intended change in substance in order to prevent the development of resistant pathogens. Furthermore, an additional application during storage or transport, or transmission from a contaminated transport container or conveyor belt, is also possible. Small amounts of substance residues can stem from earlier applications or from the drifting of plant protection measures of neighboring fields. Another possible reason is the occasional compilation of sample food batches coming from different producers who have used different pesticide substances. Finally, the improper conduct of good agricultural practices with reference to the use of pesticides cannot always be ruled out.

Chlorate residues in plant-based foods can also stem from sources other than herbicides (see Info Box). Chlorate findings play a bigger role in vegetables than in fruit. In this reporting year chlorate was detected in 316 vegetable samples (34 %), with amounts up to 0.63 mg/kg (basil from Ethiopia).

Chlorates are effective as both herbicides and biocides. Since 2008, however, chlorate is no longer authorized for use as a pesticide* in the EU. Sodium chlorate may also no longer be used in biocide products.
The presence of chlorate in food can result not only from its use as a pesticide, but also from environmental pollution (contaminated rain- or irrigation water and soil), or as a residual of food production techniques, including methods used in farming, processing, preparation, or treatment. The application of biocides, from which chlorate can result, is another possible source of contamination. In general, chlorate can be formed as a by-product of the disinfection of drinking/ industrial water with chlorine gas, hypochlorite, or chlorine dioxide..

The definition for „pesticide residues“ in Regulation (EC) Nr. 396/2005 also encompasses residues from pesticidal substances in food (including substances no longer authorized) that have pathways other than from the use of plant protectors (so-called dual-use substances), such as chlorate in food. In 2019 chlorate is thereby covered by the EU-wide valid default MRL of 0.01 mg/kg, in accordance with regulation (EC) No. 396/2005. In spring of 2020, after years of discussions, a new formulation of the maximum levels for chlorate in the EU will be valid. The specific established maximum levels will lie between 0.05 and 0.7 mg/kg, depending on the type of food.

Chlorate inhibits, reversibly, the intake of iodine into the thyroid gland and can cause unwanted health effects, especially in sensitive people such as children, pregnant women, or people with thyroid dysfunction. In addition to affecting thyroid function, chlorate can also damage the erythrocytes (formation of methaemoglobin, haemolysis).* An application of chlorate in the food chain should therefore be further reduced.

* Federal Institute for Risk Assessment (BfR), Recommendations of the BfR for health-based assessment of chlorate residues in food, from 12 May 2014 (retrieved on 6 Feb. 2019)

The European Food Safety Authority established an acute reference dose (ARfD) of 0.036 mg chlorate per kg body weight. Applying the PRIMo model based on small children, and using a variability factor of 1, none of the samples exceeded the toxicological reference value. No acute health risk was thus determined. Nevertheless, the Federal Institute for Risk Assessment (BfR) recommends continuing efforts to reduce the possible entries of chlorate into the food chain and the resulting risk to consumers [1]. 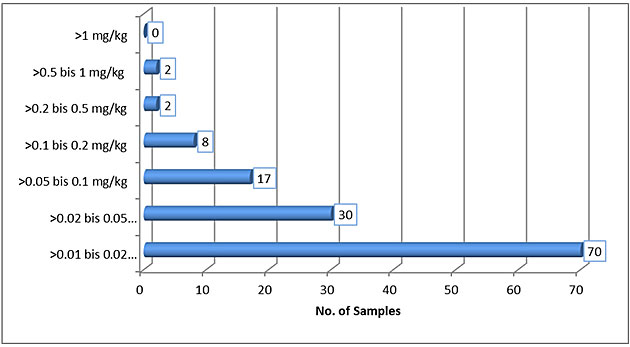 Phosphonic acid residues can result from the application of the fungicides fosetyl and the salts of phosphonic acid (authorized for use in Germany in fruit and vegetable cultivation such as cucumber, lettuce, bell peppers and fresh herbs), as well as from an earlier application of growth enhancers (so-called leaf fertilizers).

Phosphonic acid is included in the legal MRL for fosetyl (sum of fosetyl and phosphonic acids and their salts, calculated as fosetyl). Phosphonic acid was detected in 156 samples of vegetables (17 %), in amounts up to 42 mg/kg (56 mg fosetyl, sum). Only four samples were detected with fosetyl per se (2x rucola, 1x bell pepper and 1x cucumber), see Table 8. Five samples were in violation due to an exceedance of the MRL (see Annex 1).

Both fosetyl and phosphonic acid are fungicides that are permitted for use in the EU and fall under the applications area of regulation (EC) No. 396/2005, regardless of their path of entry. In addition to the use of a fungicide, another feasible means of exposure could be via a leaf fertilizer that contains phosphonates (salts of phosphonic acid). The categorization of phosphonic acids as a fungicide has precluded this application since the harvest year of 2014. There are indications, however, that plants retain phosphonic acids, only eliminating them over a period of time. Residue findings could thus be traced to an earlier, authorized, leaf fertilization.

Bromide (degradation product of the fumigant methyl bromide) tends to appear in high amounts in vegetable samples. Bromide can also occur naturally, as it comes from the soil. There are also indications that soil near the sea can have naturally higher levels of bromide; Italy often mentions this as a source. For this reason, only amounts >10 mg/kg are included in the assessment, because only from this amount can an application of the fumigant methyl bromide be assumed. Bromide amounts >10 mg/kg were detected in 16 samples, with quantities up to 43.2 mg/kg. None of the samples were found to be in violation due to an exceedance of the MRL for bromide. Since the average pesticide amount is strongly influenced by the high levels of bromide, the statistics presented in Table 1 are also provided without bromide.

CVUA Stuttgart continues to find residues of nicotine in vegetables, which is no longer authorized for use in the EU. In addition to the purposed use of nicotine as a pesticide or of tobacco brew as an allegedly ecological substance, nicotine residues can also stem from natural quantities in the plant itself or from contamination via tobacco dust or smokers‘ hands (see also [2]). There were seven notable findings of quantities exceeding the legal MRL in this reporting year.

[2] Nicotine in Food – What Does Smoking Have To Do With It?; CVUA Stuttgart.

Annex 2: Frequency of detection of the most important substances for vegetables, by type of vegetable, as a percentage of all analyzed samples (CVUAS, 2019), in comparison with 2019 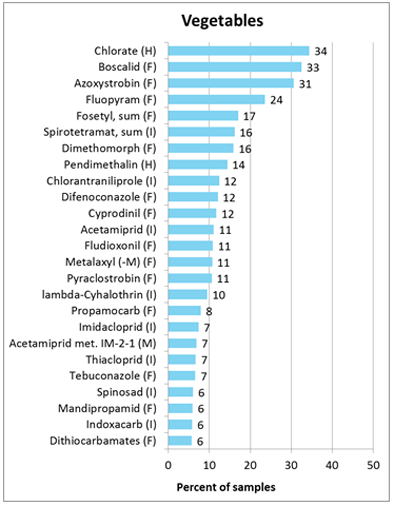 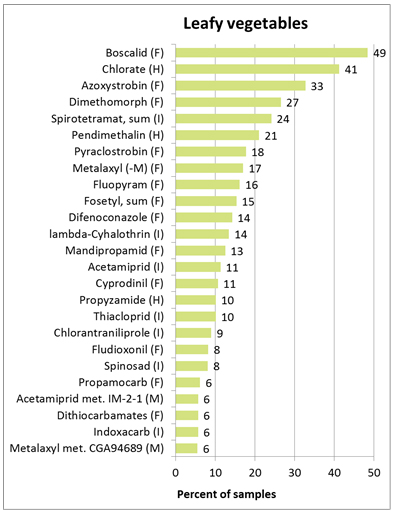 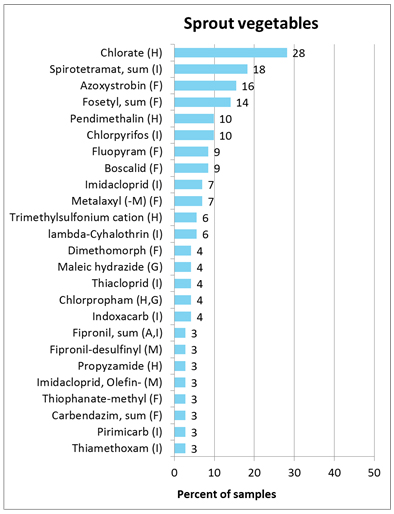 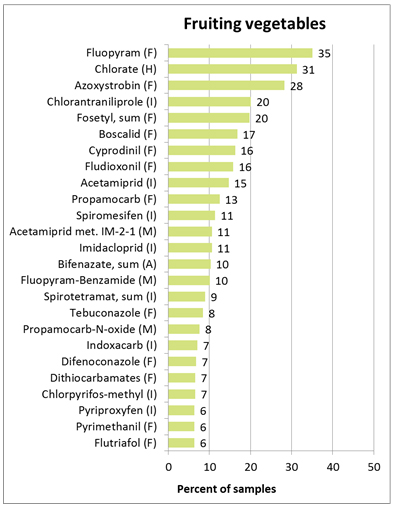 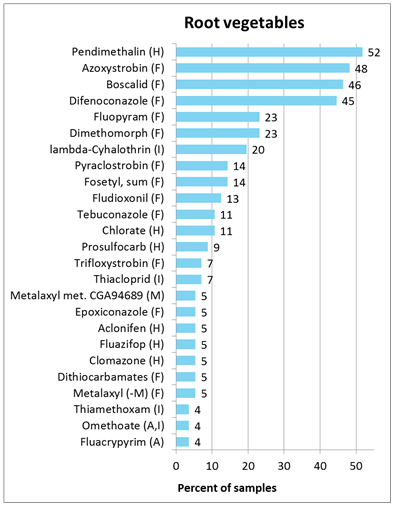 * Bromide can also stem from natural resources, so only amounts >5 mg/kg are listed.