Chemicals Rather than Bacteria?  Neither is Permitted in the EU

Residues of Fumigations with Ethylene Oxide in Sesame Seeds

In autumn 2020 high levels of ethylene oxide in sesame seeds from India were reported in Belgium and communicated via the European Rapid Alert System (RASFF). In the meantime many more cases have arisen; in November alone the word „Ethylene Oxide“ appeared in the RASFF 192 times (as of 30 November 2020). Initial analyses at the CVUA Stuttgart show that, at least for conventionally produced sesame, exceedances of the MRL have also been discovered in Baden-Württemberg. But, as is so often the case, the devil is in the details: ethylene oxide is cancerous and mutagenic, but what’s with the degradation product 2-chloroethanol that has been detected in the samples? 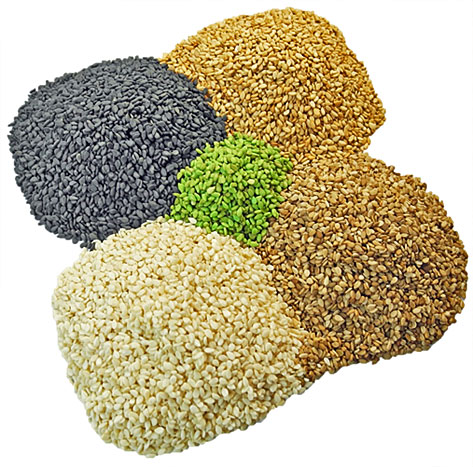 What is Ethylene Oxide?

Ethylene oxide is a colorless, highly flammable gas, with a sweet odor. It is mainly used as an intermediary for the synthesis of other chemicals. A very small fraction (0.05 % of world production) is used to fumigate and disinfect medical instruments or combat mold and bacteria in foods such as spices, nuts and oil seeds. Often found intestinal bacteria (e.g. salmonella) can so be killed.

Problems with Salmonella in Sesame

Since 2002 there have been periodic RASFF notifications as regards the microbiological situation of sesame seeds from India as well as some African countries. Salmonella was the main issue of concern. In 2014 the EU decided that sesame from India should be subjected to more frequent official controls at border control posts and control points of the EU. Three years later sesame from some African countries (Ethiopia, Nigeria and Sudan, Uganda) were also included to the list. The order was that a certain percentage of the shipments must be microbiologically analyzed for the presence of salmonella [1].

How is the use of ethylene oxide regulated?

For toxicological reasons, the application of ethylene oxide has not been authorized in Germany since 1981. Its use as a food fumigant has been fully banned in the EU since 1991 due to its categorization as a carcinogen and mutagen. In 2008 the currently valid residue definition was established as the sum of ethylene oxide and 2‑chloroethanol, expressed as ethylene oxide [2]. The MRL for sesame seeds and other oil seeds has been set at 0.05 mg/kg since 2015 [3].

With the Commission Implementing Regulation (EU) 2020/1540 of 22 October, 2020, the EU temporarily registered pesticide residues in sesame seeds from India as hazardous in Appendix II of the Implementing Regulation (EU) 2019/1793. In addition, 50 % of the shipments coming into the EU since 26 October, 2020 must be analyzed for residues of ethylene oxide [4].

The use of ethylene oxide is still permissible in third countries such as India, USA and Canada. The motto here seems to be, “chemicals are better than bacteria”. In Canada and the USA an MRL of 7 mg/kg for ethylene oxide and of 940 mg/kg (!) for 2‑chloroethanol applies for sesame seeds [5,6].

The European Rapid Alert System for Food and Feed (RASFF) is an information exchange system of the European Commission that enables a quick response from officials when food or feed could cause risk to human or animal health. The responsible contact site in Germany is the Federal Office of Consumer Protection and Food Safety (BVL), which publishes a daily review on its website for interested consumers and associations. The reports are differentiated by warnings, information, border alerts and news.

How is ethylene oxide in food determined?

Ethylene oxide is a very volatile and reactive compound. As such it therefore, remains in only very small amounts in treated foods. The main reaction product in food is 2-chloroethanol. Legislators thus designated a so-called MRL-sum for ethylene oxide and 2-chloroethanol, calculated as ethylene oxide. It is therefore not necessary to distinguish between the two substances when determining adherence to the MRL. The official German analytical method converts existing 2‑chloroethanol into ethylene oxide and determines the sum of both substances following a further conversion to 2‑iodoethanol, from which the total amount of ethylene oxide equivalents is calculated [6]. It is a complicated, special process that, for financial reasons, can only be used for individual cases within the routine food monitoring program.

Are there differences between the toxicity of ethylene oxide and 2‑chloroethanol?

As previously mentioned, ethylene oxide is categorized as a carcinogen and a mutagen, both under Category 1B (ECHA classification [7]), so foods with determinable residues of ethylene oxide are classified as a health risk.

Data for 2‑chloroethanol, the degradation product of ethylene oxide, is inconsistent and, to some degree, incomplete. No definite statement can be currently made regarding carcinogenic characteristics of 2‑chloroethanol. There is plenty of evidence of genotoxic activity, but the existence of a possible threshold value and the in vivo relevance has yet to be conclusively clarified. There is currently no indication that 2‑chloroethanol has a higher level of toxicity than ethylene oxide. According to the Federal Institute for Risk Assessment (BfR) in its current opinion statement of 20 November, 2020, the risks from 2‑chloroethanol should therefore be assessed to those from ethylene oxide, as a precautionary measure [8]. Foods can therewith also be classified as unsafe if the reported ethylene oxide amount is only based on the determination of 2‑chloroethanol.

Development of a quick analytical method

CVUA Stuttgart has developed an analytical procedure in the last few weeks in which ethylene oxide and 2‑chloroethanol can be verified and determined directly, side by side. Both substances were successfully integrated into existing, widely used multi-methods (QuEChERS, QuOil [9]). This will facilitate the routine analysis of ethylene oxide and its degradation product in the future.

Special investigative program „Sesame“ - what was the result?

There were 14 conventionally produced samples: six from India, four from Africa or Nigeria, three of unknown origin and one from Turkey. Five of the samples (36 %) were in violation for exceeding the MRL-sum for ethylene oxide. Of these, four were from India; the fifth sample was given as coming from Africa. In all cases, it was not ethylene oxide itself, but the degradation product 2‑chloroethanol that was identified and determined, with amounts between 0.13 and 10.5 mg/kg expressed as the “sum of ethylene oxide”. Due to the MRL exceedances, these samples are not marketable in the EU and, given the recent toxicological assessment of the BfR, are not considered safe for consumption.

Eight samples were from organic production: six from India and Uganda and two of unknown origin. Neither ethylene oxide nor 2‑chloroethanol could be detected in two of the eight organic samples. Traces of 2‑chloroethanol under the limit of determination were detectable in the remaining six samples. These trace amounts could well have been caused by cross-contamination such as dust.

The sesame samples were also analyzed for over 750 other pesticides.

Table 1 gives an overview of results for all pesticides, including ethylene oxide, obtained in samples of conventionally cultivated sesame. Table 2 lists the conventional samples where MRL exceedances were detected, as well as the pesticides concerned.

The MRL exceedance rate of 50 % among the analyzed conventional samples is very high. Nevertheless, only a few substances were involved. In addition to ethylene oxide, these included nicotine, chlorate and, in one case, (es‑)fenvalerate, a synthetic pyrethroid. Nicotine can also end up in products via cross-contamination, such as from tobacco (see also [10,11]), as can chlorate, for which there are several pathways, such as from irrigation or cleaning water [12,13].

Apart of 2‑chloroethanol, the residue findings of other pesticides can be characterized as minimal overall.

The eight organically produced samples were also analyzed for the full scope of pesticides. The amount of bromide detected in two samples was over the maximum limit of 20 mg/kg; however, the exceedance was not verified by consideration of the measurement uncertainty. Bromide can stem from fumigation with methyl bromide, but it is also absorbed by plants from soil, where it exists in a natural form to some extent. The amounts found in such a case tend to be lower, however. The findings were submitted to the responsible officials, so that an investigation into the cause of the findings can be carried out. Further findings were made for chlorate and phosphonic acid (one case each), both being under the MRL. Synthetic pesticides were undetectable.

What is yet to be done?

The EU Commission reacted quickly and resolutely: sesame from India may only be imported into the EU upon presentation of a certificate confirming a negative analysis (see above).

Sesame that is already on the EU market and that exceed the maximum levels must be removed, including food products that were manufactured with sesame.

The MRL exceedance rate of 50 % among the conventionally produced sesame samples in our special investigative program was very high. With the measures taken this is expected to change very quickly. However, we as official food controllers are on high alert. We will continue and expand our investigations, scrutinizing further countries of origin as well as other matrices, such as oil seeds and spices. With the new analytical methods, this is also now possible.

We are very grateful to our „Pestis“ team for their engagement and flexibility in carrying out the many extra experiments, validations and sample analyses along with their routine activities. In so doing, they have made an important contribution to the protection of consumers.

[7] European Chemical Agency, Classification of substances and mixtures, retrieved on 25.11.2020

[10] Nicotine in Food – What Does Smoking Have To Do With It?

[11] Nicotine from tobacco – a "natural" pesticide?