Spuds, taters or just potatoes; there may be different names for the common potato, but one thing they have in common. The observant consumer will notice labels posted nearby or on the packaging of potato products in supermarkets or grocery stores indicating an “after harvest treatment”. But what does this actually mean? Will even more pesticide residues be found in potatoes?

As part of its official food control program CVUA Stuttgart analyzed a total of 228 samples of conventionally produced potatoes for residues of over 750 pesticides and contaminants over the past five years (see Table 1). Residues were detected in 212 (93 %) of the samples, and two or more residue substances (so-called multiple residues) were found in 177 (78 %) samples.  An exceedance of the legally established maximum level was found in 10 samples. Five of these samples came from Germany, three from Cyprus, and one each from France and Israel. In addition, eight samples were in violation for containing an excessive amount of chlorate. These were not included in the table, however, because chlorate residues in plant-based foods can result not only from herbicide applications, but also from environmental pollution such as contaminated rain or irrigation water. Chlorate can also form as a by-product of drinking water disinfection, thus landing in food products at all levels of the food chain. Further information on chlorate is available in our report „Residues and Contaminants in Fresh Fruit from Conventional Cultivation, 2019“ [1].

Excluding the formal objections due to chlorate, 96 % of the conventionally produced potato samples analyzed since 2016 were inconspicuous. Table 1 depicts the average amount of pesticide substances detected in the potatoes. Given the relatively high levels of fosetyl residues normally found in plant-based foods, this fungicide is excluded from the average amount of residues presented in the table, in order not to distort the overall picture.

Organic – is there a difference?

In most organically produced foods either no pesticide residues at all, or only trace amounts are detectable. Moreover, organic products in general are far less likely than their conventional counterparts to contain multiple residues [2]. This also pertains to potatoes.

From 2016 to Oct. 2020 a total of 44 organically grown potatoes were analyzed for residues of over 750 pesticides and contaminants. An exceedance of the legally established maximum level was determined in two potato samples. One of the samples was reported for containing an excess of chlorate, while the second sample exceeded the limit for melamine. None of the analyzed potatoes contained multiple residues. The rule for organic products is hereby confirmed: „organic on the package means organic in the package”.

When shopping for potatoes it’s not uncommon for consumers to find signs nearby the potatoes or directly on the packaging itself declaring “treated after harvest”. What is behind this?

In order to help potatoes retain as long a post-harvest shelf-life as possible, they are often treated with the growth regulator chlorpropham. This inhibits sprouting of the tubers, thus extending their shelf-life and storage for a longer time-frame.

In Germany the application of the sprout inhibitor chlorpropham has thus far been authorized for conventionally grown potatoes, but its use must be labeled with the declaration „treated after harvest“. Naming the actual substance is not required, however. In contrast, this form of preservation is not permitted for organically grown potatoes. Illustration 1 depicts the frequency of detection for substances used on conventionally grown potatoes. Chlorpropham was documented far more frequently than the other pesticide substances, at a rate of 54 % of the analyzed samples. 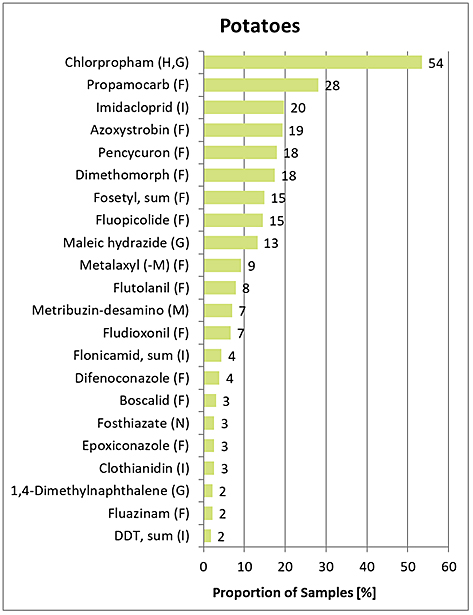 Illustration 1: Frequency of Detection for Substances in Conventionally Produced Potatoes

Before pesticide substances can be used for the first time they must go through a thorough testing procedure to obtain authorization for their use. Without this permission, they cannot be used in the EU. An important aspect of this process is the evaluation of any health risks to humans and animals, as well as possible effects on the environment that could result from their use. If a plant protection substance is approved, this authorization is usually valid for 10 years. Upon expiration, an extension of the approval can be applied for. The substance will be evaluated anew, relying on the most current scientific knowledge. The importance of these updated evaluations can be seen in that many substances such as chlorpyrifos subsequently lose their authorization over a period of time [3].

As a case in point, the European Commission has recently decided not to renew authorization for the substance chlorpropham. The new evaluation determined that a health risk to humans and animals could no longer be ruled out. Although chlorpropham itself was not considered to be more hazardous than before, the main degradation product 3-chloroaniline was now seen to present a possible risk. What is the result of this decision?

Approval for pesticides that contain chlorpropham expired 31 July, 2019 in Germany. The grace period ended on 8 October, 2020, after which this sprout inhibitor can no longer be used. Any remnants of the substance must be disposed of and potato storage areas must be thoroughly cleaned in order to prevent new potatoes from becoming contaminated with old remnants of the substance [4]. At the same time, the legal MRLs for chlorpropham have been significantly lowered. Previously, potatoes could not exceed an amount of 10 mg/kg; the future MRL has now been changed to 0.4 mg/kg.

How does the situation look for the potatoes we analyzed over the past five years? Table 2 presents the chlorpropham residue investigative results for conventionally produced potatoes. Fortunately, none of the samples presented any concern. Even the highest measured amount of chlorpropham of 7.4 mg/kg in a potato sample from 2019 was within the legally established MRL of 10 mg/kg.

If the updated MRL of 0.4 mg/kg had been applied, the situation would look different. In this theoretical case 41 of the analyzed potato samples would have failed the legal requirement. However, forgoing application of the sprout inhibitor chlorpropham in the future and carefully cleaning up its remains in storage containers will promote adherence to these new maximum levels.

The use of chlorpropham is not without alternatives, however. Another sprout inhibitor for potatoes that is still authorized is 1,4-dimethylnaphthalene. This substance has already been seen in 2 % of the analyzed conventional samples (see Illustration 1). Whether the frequency of its detection increases will be revealed by continued analyses of potato samples.

The growth regulator chlorpropham is often used to extend the shelf life of conventionally cultivated potatoes for as long as possible. These potatoes must be labeled with the information „treated after harvest“. Fortunately, despite frequent detection of chlorpropham in the conventionally produced potato samples, the legally established maximum limit hasn’t been exceeded. A look at our analytical data since 2016 shows that 96 % of the conventional and 98 % of the organic potato samples were inconspicuous in terms of contamination from plant protector substances (excluding formal objections due to chlorate).