Elephant Foot Yam: A Burning Problem, Not Only While Cooking

The elephant foot yam (amorphophallus paeoniifolius), which belongs to the botanical family aroids, is eaten throughout Southeast Asia, especially in India [1]. The tubers, weighing as much as 9 kg, are boiled or pickled for a vegetable dish, or dried, fried, and eaten as “crisps“[1, 2]. However, preparing the bulb incorrectly can cause intense irritation to the hands and to the skin as well as mucous membranes in the mouth and throat when eating it. This irritation causes an itching, stinging and burning sensation.

We received a complaint sample from official food controllers, brought to them by a consumer (see Illustration 1). The man had bought the potato-like vegetable in a supermarket and had made various dishes with it at home. Already during the initial preparation he felt a light burning sensation on his hands. As he ate the prepared dishes, he also experienced burning in his mouth and throat. Being the central laboratory for fresh fruit and vegetables for the state of Baden-Württemberg, this complaint sample thus landed on our table for investigation. 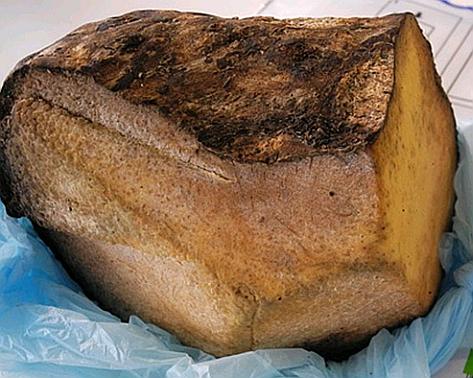 Illustration 1: Part of an elephant foot yam submitted by a consumer as a complaint sample

The microscopic analysis revealed individual as well as bundled needle-like formations, so-called raphides, both inside and on the outside peel of the tuber (see Illustration 2). The existence of such small crystals of calcium oxalate crystal needles (raphides) in elephant foot yams is also described in the literature [1]. Due to their needle-like structure, these can trigger symptoms such as a stinging or burning sensation on the tongue or in the oral cavity, as well as skin irritation on the finger.

Illustration 2: Individual and bundle-formed raphides from the inner part of the tuber

Oxalic acid is an organic acid that occurs naturally in a few individual fruits, but mainly in vegetables such as rhubarb, spinach, Swiss chard, and red beets. The typically sour taste of rhubarb in particular is attributed to the presence of oxalic acid. From a nutritional point of view, oxalic acid is considered detrimental, because it reduces the absorption of trace elements from food. Furthermore, the intake of larger amounts of oxalic acid can cause the formation of calcium oxalate crystals (the salts of oxalic acid) in the kidneys, which can facilitate the formation of kidney stones. It is advisable, therefore, to eat such vegetables, especially rhubarb, cooked, not raw. Oxalic acid is unstable when heated, so the amount can be significantly reduced by cooking. Rhubarb leaves should not be consumed in general, because they contain especially high levels of oxalic acid compared to the stalks. 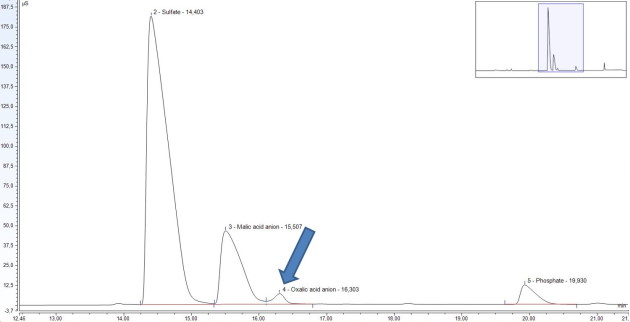 Illustration 3: Chromatogram of the elephant foot yam determination using ion chromatography and conductivity detection. The signal for oxalic acid is marked with the blue arrow; the other signals represent naturally occurring sulfate, malic acid and phosphate.

Given the presence of raphides evidenced by use of light microscopy and the determination of oxalic acid determined by ion chromatography, it can be assumed with virtual certainty that the complaints made by the consumer were caused by the calcium oxalate crystal needles (raphides) in connection with improper handling of the elephant foot yam. Recommendations made in the literature for reducing the amount of raphides suggest salting the yam with table- and other salts, followed by cooking the yam [1]. In addition, the wearing of rubber gloves or smearing the hands with coconut oil is recommended to prevent itching of the hands during preparation. Neutralizing the raphides from the calcium oxalate can be achieved by soaking the elephant foot yam in tamarind (also called sour date) water, buttermilk or quark [5-7].

Classification as a Novel Food

Foods and food additives that had not been consumed in the European Union to a significant degree before 15 May 1997 are classified as novel foods in accordance with regulation (EC) 2015/2283 [3]. Before novel foods can be marketed, they must first receive authorization and then be listed in the Union list, which is freely accessible on the Internet. Since the elephant foot yam is not on the Union list, nor is it known to have been widely consumed in the EU before 15 May 1997, the sample was classified as an unauthorized novel food. Pursuant to regulation (EC) 2015/2283, only novel foods that have been approved and listed in the Union list may be marketed in the European Union.

Assessment to be Unsafe

Due to the raphides contained by the elephant foot yam, this tuber can only be safely used when the consumer has the necessary information regarding its proper handling and preparation. Since this food is mainly consumed in the Asian region and would be classified as a novel food in the EU, it cannot be assumed that the average European consumer is familiar with the proper technique for its preparation. According to our information, the plaintiff in this case was not given any instructions regarding the preparation of the yam at the time of his purchase. Therefore, the sample was deemed unfit for human consumption and judged, pursuant to regulation (EC) No. 178/2002, as an unsafe food [4]. In accordance with this same regulation, foods that are judged to be unsafe may not be marketed.

The complaints presented by the consumer were confirmed with utmost certainty to have been caused by the elephant food yam, as evidenced by the analyses carried out on the tubor. The sample presented in our laboratory was classified as an unauthorized novel food in the EU. Furthermore, it was deemed to be unsafe, which precludes this food from being marketed in the EU. Whether one should have the same attitude as Pippi Langstrumpf when it comes to unfamiliar, exotic foods („We’ve never tried that before; surely it will be good“) is up to each consumer to decide.