Residues and Contaminants in Fresh Fruit from Conventional Cultivation, 2020

Our analysis of conventionally cultivated fresh fruit from 2020 shows a slight worsening over last year in terms of the residue situation. Particularly notable were exotic fruits, especially pomegranates, maracuja and papaya. Two of the analyzed samples contained pesticides in amounts that could pose a health risk. Our general tip: wash fruit with warm water before eating, as this removes some of the residues.

Compaired to previous years, inclusion of the polar pesticide chlorate in the calculation presents a lower rate of MRL exceedances, whereas its exclusion shows a somewhat higher rate. In 2020 higher, specific MRLs were established for chlorate residues to reflect the fact that chlorate ends up in food as a contaminant. In this reporting year just two (0.3 %) samples (nectarines and strawberries from Spain) were in violation due to exceedance of the new specific threshold value for chlorate (in 2019 there were 22 (2.7 %) samples).

A closer look at the countries of origin with the highest rate of exceedances (> 9 %) reveals that these are mostly third countries (see Table 1).

Maximum residue levels (MRLs) are not toxicological endpoints or limit values. They are derived from residue investigations carried out under realistic conditions. The expected residues are then compared with toxicological limit values, in order to ensure that neither a lifelong nor a one-time intake of the substance poses a health risk.

Maximum residue levels regulate trade and must not be exceeded. Food containing residues above the MRL are not marketable; hence, they may not be sold. Not every exceedance of an MRL poses a health risk, however. It is important, therefore, to make differentiated observations.

All of the samples were routinely analyzed using the QuEChERS multi-method and the QuPPe method (for very polar substances see also http://quppe.eu) for over 750 substances. Table 2 gives an overview of the analyzed fruit samples, itemized by country of origin.

*The comparatively high levels of fosetyl (sum), bromide and surface treatment agents (thiabendazole, imazalil, prochloraz and o-phenylphenol) strongly affect the average quantity of pesticides per sample. Therefore, the average amount is also provided without these substances.

The year 2020 saw 602 (97 %) fruit samples with residues. According to the official definition of residues (see Annex 4), 193 different pesticide substances were detected.

An average of 6.2 different substances was detected per sample. The average amount of pesticide residues was 0.44 mg/kg, excluding fosetyl (sum), bromide, and the surface treatment agents that are mainly found on the peel of citrus fruits, to some extent on stone fruits, and in larger amount on exotic fruits.

Two of the fruit samples from conventional cultivation analyzed in 2020 contained amounts that exhausted the ARfD established by the European Food Safety Authority (EFSA) PRIMo Model by 100%:

The pear sample with chlorpyrifos residues was judged to be unsuitable for human consumption, in accordance with Article 14, Para. 2 b VO (EC) No. 178/2002.

Whether an orange poses an acute health hazard is difficult to judge because, to meet the legally established definition of residues, these fruits must be analyzed together with their peels. A reliable risk assessment for the edible parts of the fruits is therefore difficult to make.

For the evaluation of pesticides that have a high, acute toxicity and that can cause health damage after just a single or short-term intake, the Acceptable Daily Intake (ADI) value is only appropriate to a limited extent. Since the ADI is derived from long-term studies, it is possibly inadequate as a measure of acute risk from residues in food. Therefore, in addition to the ADI value, a further exposure limit has been established, the so-called Acute Reference Dose (ARfD). The World Health Organization defines the ARfD as the amount of a substance one can consume over the period of one day or in one meal without resulting in any discernible health risk. Other than for the ADI, the ARfD value is not determined for every pesticide, but only for such substances that, when taken in sufficient quantities, could cause damage to one’s health even after just one exposure.

Table 3 shows an overview of the analytical results for different fruit groups.

*Individual samples contained more than one substance exceeding the MRL

Citrus and exotic fruits contained the highest average of MRL exceedances. Annex 1 lists the MRL exceedances in conventionally produced fresh fruits. Samples from Turkey were especially notable here; 9 out of 41 samples (22 %) exceeded the MRLs, 6 of which were pomegranates. Annexes 2 and 3 present the frequency distribution of the detected substances.

Presentation of Results for Specific Types of Fruit

These sensitive fruits are vulnerable to mold, especially in damp weather, so an increased use of fungicide may occur, depending on the weather situation.

Table grapes also contained myriad substances; one sample contained as many as 26 different substances. Fungicides were also the most often substance detected here, including fosetyl (sum), dimethomorph, boscalid and penconazole, followed by the insecticide spirotetramat. Despite the many detected residues, only one table grape sample from Turkey contained an excess of the substance bromuconazole.

*No percentage is given for sample sizes under 5.

Citrus fruits contained an average of 6.9 different substances and 0.67 mg pesticide per kg (average quantity of pesticide excluding fosetyl, sum; surface treatment agents; and bromide). When the surface treatment substances thiabendazol, imazalil, prochloraz and o-phenylphenol (often applied to the peel of citrus fruits in large amounts) are included in the calculation, the average comes to 4.1 mg pesticide per kg. Most of the oranges, clementines, satsumas, mandarines and lemons came from Spain. Limes came from Brazil, Mexico or Vietnam. MRL exceedances were found here for substances that are no longer authorized for use in the EU. As with last year, there was also a notable exceedance for fenbutatin-oxide, an organotin compound that has hardly been seen in citrus fruits in the last few years.

Exotic fruits contained an average of 3.6 different substances and 0.18 mg pesticide per kg (excluding fosetyl, sum; surface treatment substances; and bromide). Although exotic fruits contain the least amount of residues of all other types of fruits, they also have the highest rate of MRL exceedances.  Exotic fruits often come from so-called third countries, where other climatic conditions prevail and different pesticides are authorized for use.

The residue findings are strongly dependent on the type of sample and their country of origin. Since the particular focus and risk-oriented questions are different each year, the results from one year cannot be seen as representative of the general situation. 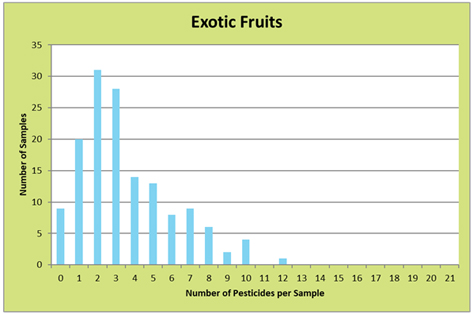 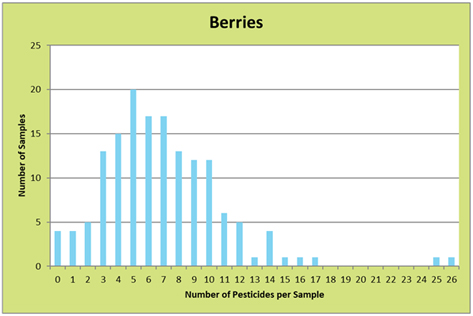 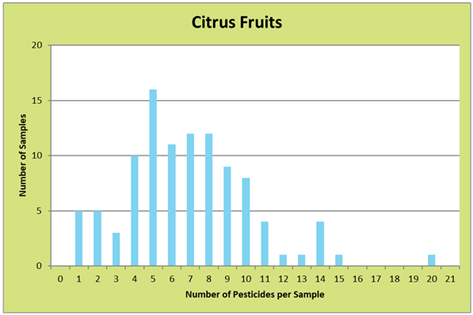 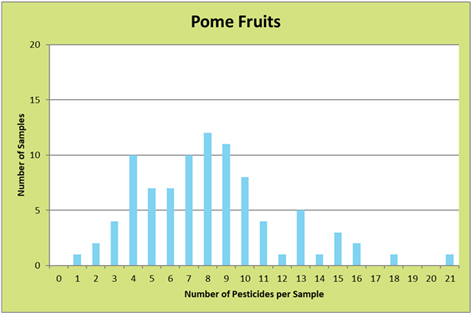 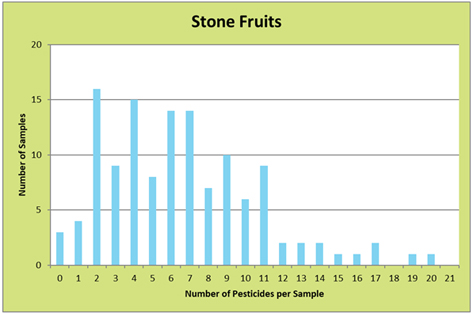 When making comparisons of the number of pesticide substances used, one must consider that the individual cultures are grown in different climate zones, and are thus exposed to different degrees of stress from pests. It is therefore often necessary to take individual, differenciated measures of plant protection.

Phosphonic acid residues can result from the usage of the fungicidal plant protectors fosetyl and the salts of phosphonic acid (allowed in Germany in fruit and vegetable farming, such as grapes, blackberries and strawberries), as well as from the earlier usage of plant strengtheners (so-called leaf fertilizers).

A legal maximum residue level has been determined for the sum of fosetyl and phosphonic acid, as well as their salts. For fresh fruits from conventional cultivation, 46 % (284 samples) were detected with phosphonic acid, calculated as fosetyl, sum, with findings of up to 102 mg/kg (in blackberries). Fosetyl per se was only detected in four samples (2x table grapes, 1x strawberries, and 1x lemons; see Table 9). Violations occurred in four samples due to exceedances of the maximum for fosetyl, sum (see Annex 1).

Both fosetyl and phosphonic acid are fungicides that are permitted for use in the EU and fall under the applications area of Reg. (EC) No. 396/2005, regardless of their path of entry. In addition to the use of a fungicide, another feasible means of exposure could have been via leaf fertilizers that contained phosphonates (salts of phosphonic acid). The categorization of phosphonic acids as a fungicide since the harvest year of 2014 precludes this application, however. There are some indications that plants retain phosphonic acids, only eliminating them over a period of some years.

The insecticide and acaricide chlorpyrifos has been used to combat against sucking and biting insects in agriculture, against storage pests and ectoparasites in animal husbandry and in the household. Chlorpyrifos belongs to the large group of phosphoric acid esters, whose insecticide effect is based on an inhibition of the cholinesterase. Its triumphal march began after World War II. In contrast to the organochlorine compounds, which are persistent in the environment, organophosphates degrade very quickly. Although their acute toxicity is high, their chronic toxicity is assessed to be rather low ((E605 (parathion) won some dubious prominence in suicide cases because the inhibition of the cholinesterase especially leads to the cramping of the intestinal tract and can result in death due to respiratory paralysis)).

In 2014 the European Food Safety Association (EFSA) undertook a new toxicological evaluation of chlorpyrifos and adjusted the acceptable daily intake (ADI, chronic toxicity) as well as the acute reference dosage (ARfD, acute toxicity) downward (see Info Box) [5]. Other adjustments followed: in 2016 and 2018 several maximum residue levels were also lowered. Authorization for its use in the EU ended on 16 Feb., 2020. The transitional period during which the existing substance had to be depleted ended on 18 April, 2020. The MRL for fruit was decreased to 0.01 mg/kg, effective as of 13 November, 2020.

An exceedance of the MRL for chlopyrifos was detected in a sample of pears from China in 2020. In all, 10 samples were found to contain levels of chlorpyrifos residues above 0.01 mg/kg, although all the samples had been taken before November 2020. As a comparison, 14 findings of chlorpyrifos residues in fruit above the level of 0.01 mg/kg were made in 2019 (see Table 10).

Concomitant to chlorpyrifos, authorization for the structurally related compound chlorpyrifos-methyl was also not renewed and the MRL was reduced to 0.01 mg/kg as of 13 Nov. 2020. There were fewer findings above 0.01 mg/kg in 2020 than in 2019 (Table 11). None of the samples were in violation, since they had all been collected before November.

How does frozen fruit score?

In addition to the 618 samples of fresh fruit, a total of 47 samples of frozen fruit products from conventional cultivation were also analyzed in 2020 for residues of over 750 different pesticides, pesticide metabolites and contaminants. The country of origin was unknown for 27 of the samples, and 14 came from Serbia. All of the samples exhibited multiple residues from pesticide substances. MRL exceedances were detected in 9 samples (19 %): 4 from unknown countries, 4 from Serbia and 1 from the Netherlands. The rate of violations is therewith significantly higher than that for fresh fruits. Frozen fruit is not just fresh goods that have been deep-frozen, however. Since these products stem from completely different countries of origin, they will also contain different pesticide substances. Table 12 presents an overview of the analytical results for the different frozen fruit groups.

[1] Chlorpyrifos Is "OUT": This Insecticide May No Longer Be Used In the EU

Annex 2: Frequency of detection of the most important substances* for fresh fruit, by type of fruit, as percentage of all analyzed samples (CVUAS 2020), in comparison to 2019 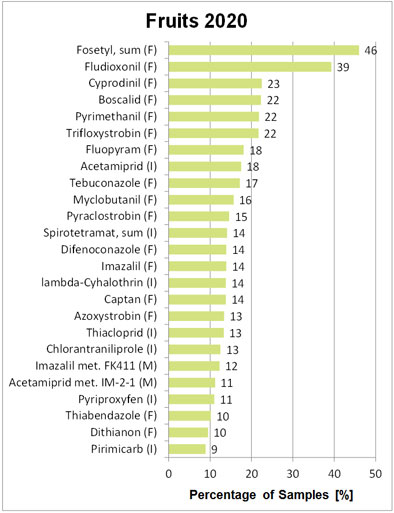 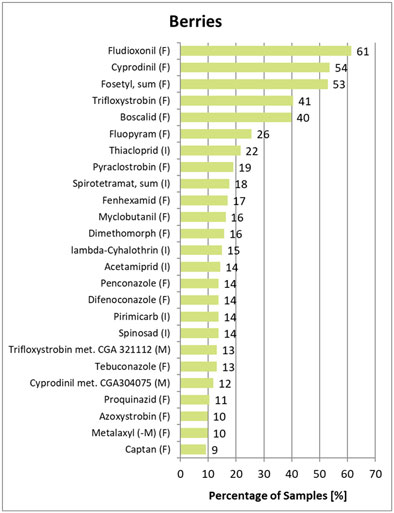 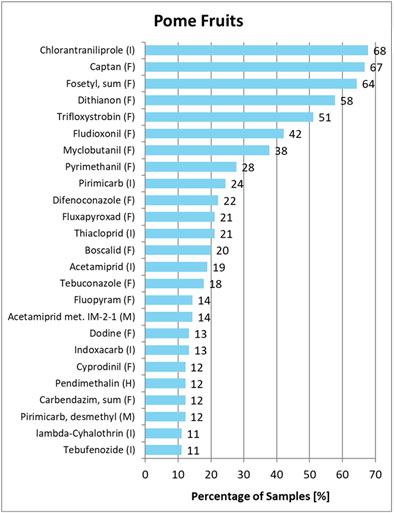 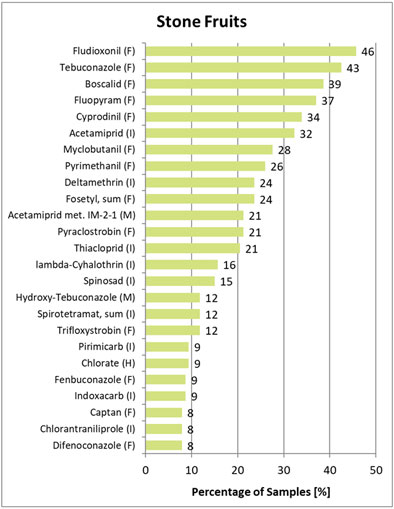 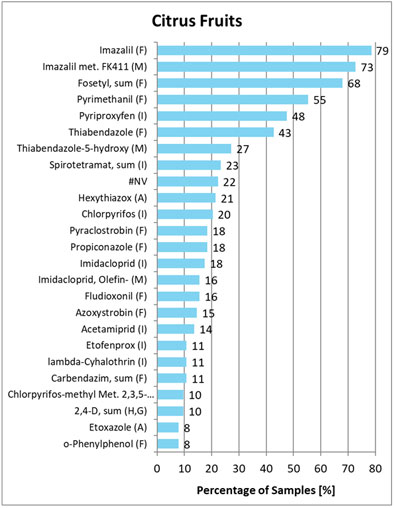 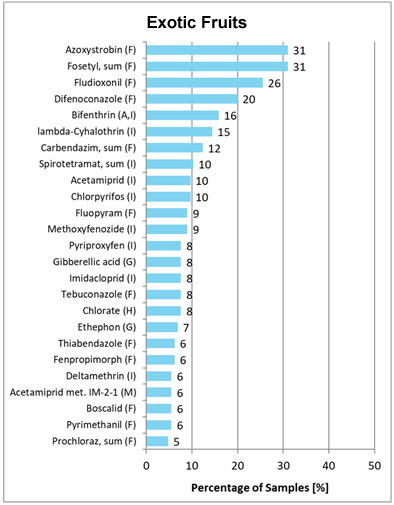