Chemicals Rather than Bacteria?  Neither is Permitted in the EU

» Part 1: Residues of Fumigations with Ethylene Oxide in Sesame Seeds

In August 2020 high amounts of ethylene oxide in sesame seeds from India were reported in Belgium and communicated in September via the European Rapid Alert System for Food and Feed (RASFF). With our newly developed analytical methods we responded by analyzing sesame, plant powders and nutritional supplements, discovering products that had been illegally fumigated. In the spirit of promoting consumer health protection we have continuously expanded our analytical spectrum, and have now made positive findings in Asian instant noodle products as well. Here, too, there were not a few cases of ingredients having been treated with ethylene oxide, resulting in considerable levels of residue contamination.

What do we mean by „Instant-Noodles – Asian“?

You don’t have time to cook, but still want something warm and fast? Many people have a few packages of instant noodles in their pantry for just such a situation. These are portioned packages with dried, usually ripple-formed noodles, including individual packets of dried vegetables, spices, spice pastes, sauces, soy sauce and often a little chili powder. Boiling water is usually poured over the ingredients and after a few minutes of waiting and stirring, the noodle dish is ready to eat. These colorfully printed portioned packages fill entire shelves in special Asian markets, but such Asian products can also be found in local supermarkets, usually placed beside the typical noodle terrines of European ready-made food producers.

Many such products come directly from Asian countries such as China, Korea, and Vietnam, but some of them are also made in the EU, based on Asian recipes. We analyzed 25 of these noodle specialties from various countries for residues resulting from fumigation with ethylene oxide. 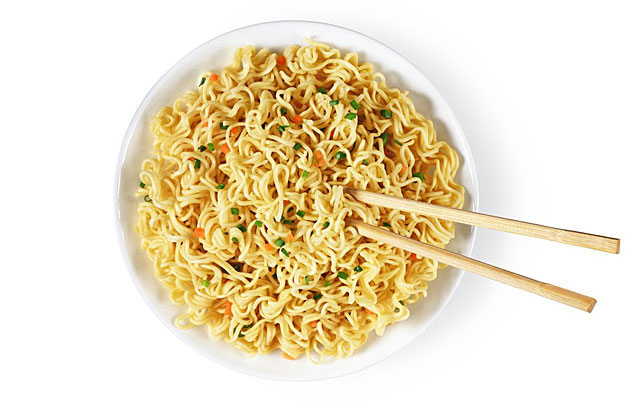 What is ethylene oxide?

Ethylene oxide is a colorless, highly flammable gas with a sweet smell. It is mainly used as an intermediary product in the synthesis of other chemicals. A tiny fraction (~0.05 % of world production) is also used to fumigate and disinfect medical instruments and to combat mold and bacteria in foods such as spices, nuts and oil seeds, but it is also used to treat food additives such as guar and locust bean gums.

How is the application of ethylene oxide regulated?

For toxicological reasons, the application of ethylene oxide as a food fumigant was already banned in Germany in 1981. In 1991 its use as a pesticide was fully banned in the entire EU, due to its categorization as a carcinogen and mutagen. In 2008 the currently valid residue definition was established as the sum of ethylene oxide and 2-chloroethanol, expressed as ethylene oxide [2]. The maximum authorized levels were set at the agreed analytical limit of quantification. In contrast, the use of ethylene oxide is still permissible in third countries such as India, but also in the USA and Canada. The motto here seems to be, “chemicals are better than bacteria”.

Further, there is also an explicit ban in the EU when it comes to the application of ethylene oxide for the sterilization of food additives [3] (see Info Box).

How are the detected amounts judged in terms of their toxicity?

In its official opinion papers [5–7], the Federal Institute of Risk Assessment (BfR) specifies a so-called “intake level of low concern” for ethylene oxide, amounting to 0.037 µg per kg. body weight. No toxicological threshold could be elaborated for 2-chloroethanol (2-CE) due to lack of sufficient data. From the viewpoint of the BfR, the risk assessment of the suspected mutagen 2-CE should be carried out with the same conditions as that for its parent compound ethylene oxide. If the “intake level of low concern” is exceeded, the food in question is classified as unsafe; an exceedance of two or more times the above-mentioned amount will result in the food product being judged a health hazard. In both cases, the affected food product will have to be removed from the market as a protective measure for consumer health. Further explanations can be found in Parts 1 and 2 of this publication.

Ad-hoc special analyses of Asian style instant noodle products from Asia and the EU: what were the results?

We investigated a total of 25 instant noodle products in portion-sized packaging, mostly coming from Asia. Included with the noodles were individual packets of ingredients such as soup base powder, dried vegetables, seasoning paste and seasoning oil. 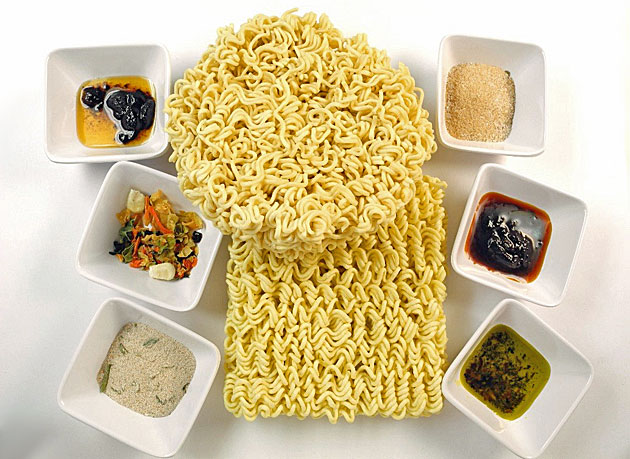 According to the ingredients list, the noodles mainly consist of cereals (usually rice or wheat) and starch (e.g. tapioca or potato) and, in some cases, modified starch (such as acetylated starch). The dried vegetable mixtures consist of, among others, leeks, onions, shallots, chives, cabbage, carrots, and mushrooms. The soup spaces contain, among others, salt, sugar, various flavor enhancers (glutamate, inosinate, yeast extract, dried soy hydrolysate) and, in some cases, spices and dried vegetables. The seasoning oils are usually sesame oil, with the occasional addition of spices, (e.g. chili). The seasoning pastes consist chiefly of coconut oil as well as spices and dried vegetables.

Table 1 presents the composition of the products as well as an overview of the analytical results of individual components.

Legend:
Empty fields: these components were not contained in the sample
n.n.: Residues of ethylene oxide (sum) were not detectable
n/a: Analysis was not carried out (not applicable)
Red highlighted : “maximum acceptable daily intake of minimal concern“ was significantly exceeded: assessed as hazardous to health
Orange highlighted: quantities of ethylene oxide (sum) detectable; advisory report submitted

The assessments and countries of origin of the samples are depicted in Graphic 1. Ethylene oxide (sum) was detectable in 11 of the 25 (44 %) samples, so we must assume that ethylene oxide treatment of individual components or additives, had occurred, which is unauthorized in the EU. Since the maximum residue levels are set at the analytical limit of determination (zero tolerance), these products may not be sold in the EU.

Even though our sample size was relatively small and can in no way be seen as representative, it is clear that there are countries in which fumigation with ethylene oxide, though banned in the EU, is widespread. Especially noteworthy among our random samples were instant noodle products from Vietnam, followed by Korea and China.

Samples from Thailand (with one exception), Indonesia and the EU were, in contrast, not contaminated with detectable levels of ethylene oxide (sum).

Graphic 1: Assessment of analyzed instant noodle products based on the ethylene oxide levels encountered, divided by country of origin (CVUAS July and August 2021); remark: one sample from Taiwan with a negative finding is not presented.

What is to be done?

The responsible food companies and the official food controllers should take necessary steps to remove the affected batches from the market. Moreover, the affected companies are required to determine the causes for the presence of ethylene oxide/2-chlorethanol in the delivery chain and to improve their own measures of control to the extent necessary, so that in the future such contaminated goods don’t enter European markets.

Analysis of these products will continue on a routine basis, although we intend to strengthen our focus on products originating from Vietnam, Korea and China.

Foods that do not comply with requirements for food safety may not be marketed (Article 14 of the Basic EU Food Safety Regulation 178/2002/EC [8]). Article 19 stipulates that in such cases the responsible food companies are obligated to act and to inform the responsible authorities. They must immediately initiate the removal of such food from the market shelves. If the product could have already reached the consumer, the company must effectively and precisely inform consumers as to the reason for the product recall and, if necessary, send out a recall notice, if other measures for achieving a high level of health do not suffice.

What do these results mean for you as a consumer?

There have already been some recalls and we anticipate further recalls of affected products. For your own protection, you can find these in the portal for food warnings, at lebensmittelwarnung.de or in the European Rapid Alert System. The responsible producers, importers and retailers will react quickly and deal with the grievances. You might, however, prefer to make your own soup dishes for a while, or pay close attention to the origin of the products.

Good news at the end

It was reported in the European Rapid Alert System that locust bean gum fumigated with ethylene oxide had been used in the making of ice cream pre-mixes. In response, we analyzed 33 samples of such pre-mixes from different ice cream parlors. The good news is: all samples were negative.

We are very grateful to our „Pestis“ team for their engagement and flexibility in analyzing the many extra samples along with their routine activities. The instant noodle packages, with their myriad individually packaged components to be analyzed, required a lot from us. Our special thanks is also extended to the competent official authorities, in particular the food controllers in Stuttgart and Böblingen, for their superb collaboration and for collecting the special samples and implementing these measures.

[1] Chemicals Rather than Bacteria? – Neither is Permitted in the EU